Norville (Tim Robbins) gets his Hula Hoop idea made, and the toy becomes highly popular and makes Hudsucker Industries a lot of money. However, he soon runs out of ideas and becomes a greedy president with a glamorous new girlfriend (Anna Nicole Smith). Amy (Jennifer Jason Leigh) is infuriated by this, and she leaves him. When the elevator operator, Buzz (Jim True-Frost), presents his own invention to Norville – the bendy straw – Norville fires him because he himself didn’t invent it. Aloysius (Harry Bugin) – the man who scrapes and paints the names on the doors – finds out who Amy really is and informs Mussburger (Paul Newman), and Mussburger later comes before Norville and tells him who Amy really is and that he will no longer be company president after New Year’s. Mussburger then gets the Board of Directors to believe that Norville is crazy and that he needs to be sent to a sanitarium.

On New Year’s Eve, Amy finds a drunk Norville trying to get a martini at a coffee & juice bar, and she tries to apologize to him for deceiving him, but he angrily leaves. Outside, he is confronted by Buzz, who was told by Mussburger to believe that Norville stole the Hula Hoop idea from himself, and with an angry mob he chases Norville to the Hudsucker Building. Norville escapes the mob, but feeling like he has hit rock bottom, he heads up to his office, puts his mailroom apron on, and then goes out the window looking to jump to his death (which is the opening scene of the film). Aloysius locks Norville out, which makes Norville change his mind, but when he tries to go back in he looses his footing and falls off the building at the stroke of midnight. As he is falling, Moses (Bill Cobbs) – the caretaker of the building’s giant clock – stops the clock and time freezes. The angel of Waring Hudsucker (Charles Durning) then comes down to meet Norville, and he tells him that the Blue Letter he was supposed to deliver to Mussburger earlier in the film was still in the pocket of his apron. Norville takes it out and reads it, and it states that all of Hudsucker’s shares would go to his immediate successor, so Norville actually owns the company. While this is going on, Moses fights Aloysius inside the clock and beats him (they seem to be, respectively, an angel and a devil both fighting for Norville’s life) and then he has Norville fall safely to the ground. Norville returns to the coffee & juice bar, finds Amy, and kisses her.

Unable to cope with Norville being company owner, Mussburger attempts to jump off the Hudsucker Building to his death, but he is restrained and sent to a sanitarium. Norville proves to be a great leader of the company, and he creates another kid’s toy, the Frisbee. 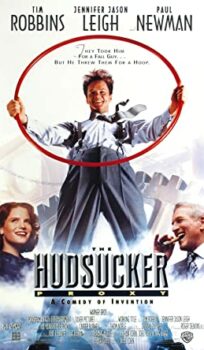