Short version:
Both police officers are shot by Dr. Heiter, but the officer kills Dr. Heiter before dying. Katsuro kills himself, and Jenny dies from her infection. Lindsay, the middle part of the human centipede, is stuck because both the front and the rear of the “centipede” are dead. The screen cuts to black before revealing what happens to Lindsay.

Long version:
Two young American girls, Lindsay and Jenny, are on a trip through all of Europe. They are approached by a man who invites them to a party in Germany. They decide to go, but like typical horror movies, they get lost and end up with a flat tire in the middle of the forest, no cell phone signal, and it’s raining. They walk through the forest, instead of following the road, for an hour, and find the house of Dr. Heiter.

Dr. Heiter invites both the women into his house. After a short time, he offers them a drink that is laced with the date rape drug, which knocks them both out. They awake the next day, strapped to hospital beds, along with Katsuro. He begins to explain to the three what he will do to them, offering up drawn pictures to illustrate his point – he literally plans to simply cut off the ligaments from their knees so they are unable to stand, then sew Lindsay’s lips to Katsuro’s anus, then Jenny’s lips to Lindsay’s anus, thus forming a human centipede.

Dr. Heiter attempts to, and succeeds in, creating the human centipede. He begins to try and train them like a dog, trying to teach the trio to fetch newspapers and eat from a dog bowl. Since Katsuro is the head of the centipede, he is basically in control of everything they do, and so he is extremely disobedient, not following any orders given. Several times, Dr. Heiter brutally whips the trio for disobedience.

After several scenes replaying the basic training theme above, Dr. Heiter brings the human centipede in for a check-up. Katsuro and Lindsay are both in good health, but Jenny’s surgical wounds are infected, and Dr. Heiter decides that she must be removed from the centipede, killed, and replaced. Before he is able to, though, the police knock on his door. He returns upstairs to greet the officers. They ask to visit his cellar, but he refuses to allow them. He tries to drug them both, but neither will fall for it and threaten to return with a warrant.

The police return with a warrant, as threatened. They kick in the door while Dr. Heiter limps away, locking what is left of the human centipede in the room. Dr. Heiter manages to stab one police officer in the neck, steal his gun, and shoot the other one. Though the officer is dying, he fires off one shot and hits Dr. Heiter directly in the head, killing him, before he dies himself.

In the room, Jenny slowly dies from her infection. With Lindsay the only living person inside the house, she is unable to do anything, since both the other parts of the centipede are dead. The screen cuts to black before it is revealed what happens to Lindsay. 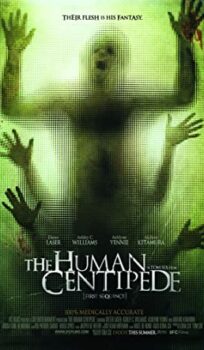