“New Eden” is a lie. It is nothing more than a death camp where those considered undesired by The Humanity Bureau are sent to be executed and burned to ash.

Noah Kross (Nicholas Cage) was so concerned about Rachel (Sarah Lind) and Lucas (Jakob Davies) because he is Lucas’ father. However, Rachel is actually Amanda, a neighbor of Rachel who accidentally killed her in a fight when Rachel was going to sell her toddler son in a famine. Amanda assumed her identity and loved Lucas as her own.

The three make it to the border only for Adam (Hugh Dillion) to corner them. He ruthlessly executes Rachel/Amanda, demanding evidence of the government’s deeds. Noah gives him the flash drive for Lucas’ safety. The drive is a blank one, so Adam kills Noah, Lucas never knowing he was his father. Adam recovers Lucas and looks to harm him, only for him and his men to be shot dead by allies of Noah. They discover the flash drive in a rabbit’s foot Noah gave Lucas and they spread the truth to the world. Riots ensue nationwide, bringing the beginning of the end for The Humanity Bureau. Lucas finds peace in Canada, finally seeing the lake Noah told him about. 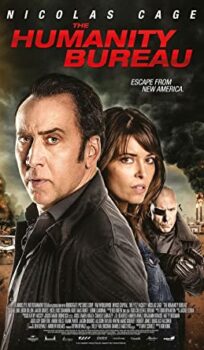