SHORT VERSION:
Katniss and Peeta manage to use their “star-crossed lovers” deception to manipulate the Gamemakers into allowing them both to share the championship of The Hunger Games, initially intended for just one District Tribute.
The President is not pleased.

LONG VERSION:
Katniss (Jennifer Lawrence) is from the mining community of District 12, one of 13 districts in Panem (former No. America). As punishment for the districts’ uprising more than 70 years ago, each district must send a boy and a girl to compete in the Hunger Games, a last-man-standing death match in a Capitol-controlled arena.  Katniss’s younger sister, Prim, is picked as the Hunger Games female tribute but Katniss volunteers to take in her place. Peeta Mellark (Josh Hutcherson) is picked as the male tribute and he and Katniss are taken from their home district to the Capitol to prepare for the Games.

Under the mentorship of Haymitch (Woody Harrelson) Katniss and Peeta sharpen their survival skills. Katniss is a master with a bow and arrow and Peeta is incredibly strong and skilled at camouflage. However, shortly before the Games Peeta admits to the public that he loves Katniss and is devastated that only one of them will make it out of the Games alive.

The Hunger Games begin and many tributes are killed within the first few hours.  Katniss starts off on her own and believes that Peeta has betrayed her by joining the “Career” tributes from Districts 1 and 2. She also teams up with the youngest tribute, Rue, from District 11 and the two destroy the Career’s food supply.  However, Rue is mortally wounded and dies in Katniss’s arms.  Katniss is devastated and sings to Rue in her final moments. Seeing Katniss’s compassion insights a riot in District 11 when they realize how barbaric and unfair the Games are.

The game master announces to the remaining tributes that this year, two tributes from the same district can be the victor so Katniss searches for Peeta and finds him critically wounded. He had teamed up with the Career’s to protect Katniss and they turned on him.  Katniss makes a daring journey to get Peeta the medicine he needs and she succeeds, but only after killing one District 1 tributes.  Once Peeta has recovered, the two go hunting and Peeta almost eats Nightlock, a poisonous berry. While she stops Peeta from eating them, she decides to save some in case they can be used to defeat the other tributes.

However, all is not well. President Snow (Donald Sutherland) is furious at how Katniss has essentially rebelled against the Capitol and how her compassion towards Rue started a riot in District 11. We are left with the feeling that President Snow will get his revenge on Katniss.

Katniss and Peeta return to District 12 as the victors.  Peeta truly loves Katniss but Katniss has feelings for her best friend, Gale (Liam Hemsworth).  While Peeta wants to remember everything that happened during the Games, Katniss just wants to forget. 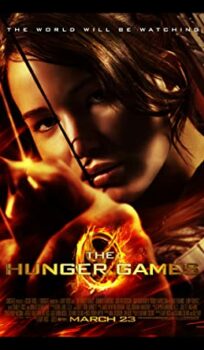