Sgt James (Jeremy Renner) takes over for Thompson (Guy Pearce) who is blown up in the opening scene.  He is part of a 3-man bomb squad in Iraq.  We are continually reminded about how many days their unit has left in Iraq.

Every day is a new adventure and Sgt James is one cocky bomb veteran.

With only a few weeks remaining James’ cockiness results in the third man in the group almost dying.  He is airlifted out of there.

With 2 days left Sgt James comes real close to getting blown to bits when he can’t get a bomb off of an Iraqi citizen who is pleading with him that he wants to live.

We cut to some time later and James is back at home with his son and girlfriend (Evangeline Lily).  He is telling his infant son that the things he loves now won’t seem so special when he grows up.  He realizes that he only loves one thing…

We cut to a little while later and we see Sgt James, back in Iraq walking down the street in search of another bomb. 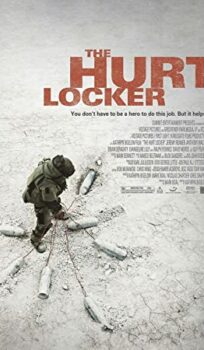