Fast Eddie Felson (Paul Newman) is a pool hustler who travels to New York to compete with the pool great Minnesota Fats (Jackie Gleason). After a long, long, long pool session, Minnesota Fats beats Felson. Eddie can’t find anyone to play him after his defeat, as he finds that his reputation as a hustler is out. He falls in with Sarah Packard (Piper Laurie), a drunk student with a limp. After many adventures in failure (including getting his thumbs broken for being a pool shark), Eddie is given a second chance by a gambler named Bert Gordon (George C. Scott), who sets him up to play a southern gentleman. On the trip down to the game, Bert takes every chance to destroy Sarah, who is along for the ride. After a long night in which Eddie loses a lot and Bert refuses to stake him, Eddie finally comes back and wins about 12,000 dollars. That night, Bert returns to their rooms before Eddie and has sex with Sarah. Sarah goes into the bathroom, writes “Perverted, Twisted, Crippled” in lipstick on the mirror, and commits suicide.

Eddie returns to New York with the character he didn’t have the last time he played Fats. This time, the game only takes a few minutes of screen time, and it ends with Fast Eddie defeating Fats soundly. Bert asks for his cut of the winnings but Eddie refuses him. Bert agrees, but warns Eddie never to enter a pool hall in New York ever again. 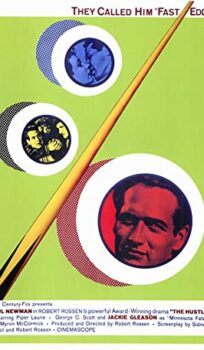