This is the life long story of Richard Kuklinski (Michael Shannon).

This fits Richard fine as he has a troubled past with whippings from his Polish immigrant father and trouble with his younger brother, Joseph (Stephen Dorff) who is serving jail time for killing a little girl.

Richard lets a female witness go during a killing of Marty Freeman (James Franco) as he does not kill women or children.  This gets Robert Pronge (Chris Evans) involved to kill the female witness.  Demeo doesn’t like leaving witnesses and puts Richard on suspension.

Robert and Richard team up so that Richard can continue to earn a living.  Demeo finds out and all contracts are stopped.  One of Richard’s daughters is hospitalized after a hit-and-run.  Richard suspects Robert and kills him.

Richard takes one last job so that he can kill Demeo but is double crossed and gets arrested.  The ending sequence states the facts that he committed over 100 killings in 22 years.  He was sentenced to two life terms and never saw his family again.  He died in prison under suspicious circumstances before he was to testify against a Gambino crime family underboss. 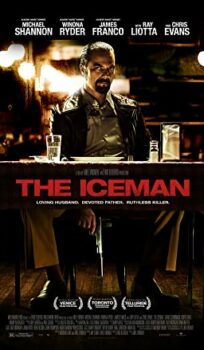