The Importance of Being Earnest(2002)

Jack Worthing (Michael Redgrave) uses the fiction of a wayward brother, Earnest, to give him reason to regularly visit London, where he woos Gwendolyn (Joan Greenwood) under the name of Earnest. His friend and Gwendolyn’ s cousin Algernon Moncrieff (Michael Denison) discovers Jack’ s ruse when he finds a cigarette case given to Jack by his 18 year old ward, Cecily (Dorothy Tutin).

Jack proposes to Gwendolyn, who accepts, but her mother Lady Bracknell (Edith Evans) refuses when she learns that Jack is an orphan who was found by Cecily’ s grandfather.

Algernon sneaks to Jack’ s country estate and proclaims himself to be Jack’ s brother Earnest. He falls in love with Cecily, who was already in love with the bad-boy Earnest. Jack returns and finds Algernon and is forced to accept him as Earnest so as not to give up his lie to Cecily.

Jack and Algernon separately arrange to be christened Earnest, as both Cecily and Gwendolyn vowed they could only ever love someone named Earnest. During their absences, Gwendolyn arrives at the country and she and Cecily learn they are both engaged to ‘ Earnest Worthing.’

When Jack and Algernon return they are spurned for their treachery, but then forgiven when they share their plans to be christened. Lady Bracknell arrives, however, and disrupts everything until she discovers that Cecily’ s tutor is a Miss Prism, the former nanny for Bracknell’ s sister’ s newborn. Miss Prism, it is revealed, had absent-mindedly put the baby in a handbag and left it at Victoria Station Brighton Line cloakroom. This is where Jack was found by Cecily’s grandfather and it turns out he was the baby Prism left behind.

Thus, Jack does have a brother: Algernon. And it turns out that the baby was named after his father, whose name was Earnest. The play and movie end with Earnest and Gwendolyn happily embracing and with Algernon and Cecily happily embracing. Presumably Algernon will be re-christened. And presumably Earnest and Gwendolyn being first cousins poses no problem for their union 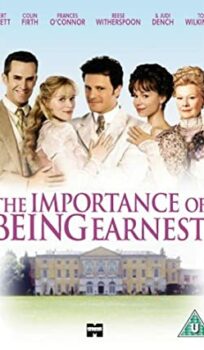