One day, he and his wife and navy buddy, George Stickle (not pickle) are down at the docks. He wishes to be a fish, and becomes one – an animated one.

He meets another fish – real cutie he calls “lady-fish” and a crusty old crab. When America enters the war, he decides to help. Goes to a navy ship and offers to act as guide to find u-boats. George becomes his liason to the higher ups.

The germans wonder what this “limpet” is that keeps sinking their subs. They think it’s a mine and develop a torpedo to home in on the “throm” – the very loud sound – Henry can make.

As Henry leads fleet, he loses his glasses and his crab friend comes along to act as his eyes. The germans fire their toredos, but once he figuers out how they work, he leads them back to the subs!

Henry returns to the dock where he fell in to see his wife a last time and she brings him his spare pair of glasses. He and lady-fish leave.

Story jumps ahead to present. George and his old Skipper (both old and gray) have been ordered to find Limpet. They go to the area in the Bahamas where Henry first contacted their ship. There they find him, make him a Commodore in the Navy Reserves and ask him about certain dolphin activity. 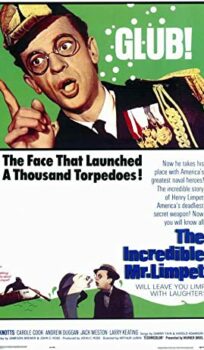