Ivan’s (Tom Hulce’s) pregnant wife, Anastasia (Lolita Davidovich), commits suicide out of shame -for not knowing who was the father of the child- and sorrow -for not having little Katya Gubelman with her-.  Stalin (Aleksandr Zbruyev) passes by, and when Ivan comes out to meet and greet his leader, as well as tell him about his “nice life along with his wife”, Stalin realizes he is lying and scares him off, deeply dissapointed in him (he says, eerily: “I KNOW EVERYTHING ABOUT EVERYONE!!!).

Ten years later, Ivan, alone and embittered, meets again with Katya (Bess Meyer), now a grown-up young woman.  When he asks her about how had she been all those years, she lets her know that, thanks to Comrade Stalin, she was fed, clothed and educated by the State (it is inferred that Anastasia asked the Man himself to do so for the girl, a long time ago).  However, Katya doesn’t stay long, and leaves.

Eventually, Stalin dies, and his corpse is put on display for the people to pay their respects.  Thousands gather around the Kremlin, and many tremple each other to death, trying to see Stalin’s body.  Ivan is among the chaos, and he sees Katya in the distance, about to die trempled herself.  He manages to get to her, and tells her that he WILL take care of her and lover like a daughter. Then, we hear Anastasia, from Heaven, asking again: “Who do you love more, Ivan?  Me or Comrade Stalin?”, and answering:  “I love you most than anything in the world”, as he stares vacantly to the sky.

The film ends with title cards anouncing that thousands of people died that day; months later, Comrade Beria (Bob Hoskins), among many others, was arrested and executed; Ivan was still alive and living in Moscow -up to that moment, at least-; and Katya… how many Katyas might be out there?! 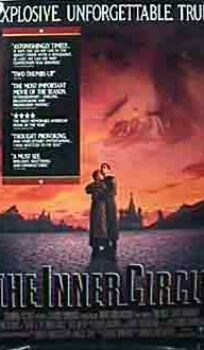