Despite threats against his family, the divorce of his wife and the possibility of incarceration, Dr. Jeffrey Wigand (Russell Crowe) testifies in Mississippi’s lawsuit against the tobacco industry that Brown & Williamson knowingly placed a carcinogenic substance, coumarin, in its cigarettes and enhanced the effect of nicotine by “impact boosting” to make them addictive.

Lowell Bergman (Al Pacino) fights CBS management to eventually get a 60 Minutes segment containing an interview with Wigand exposing this deception on the air. Afterward, Bergman quits CBS because he could not trust his corporate masters to back him when the next tough story comes around.

The end credits tell us that in 1998 the tobacco industry settled lawsuits brought against it by all 50 states to the tune of $246 billion, Lowell Bergman joined Frontline and became a professor at UC-Berkeley. (Jeffrey Wigand is now a consultant on tobacco issues.)

As a sad postscript, Richard Scruggs, the lawyer portrayed in this film as leading the crusade against big tobacco, was sentenced to 5 years in prison in 2008 for attempted bribery in pursuing a class action lawsuit against State Farm Insurance for denying Hurricane Katrina insurance claims. 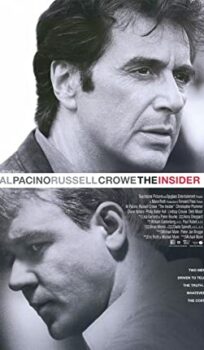