Dr. Janos Rukh (Boris Karloff) discovers a meteorite containing Radium X, an element far more powerful than radium but with the ability to heal as well as kill. Overexposure warps his mind and poisons his body, causing Rukh to literally glow in the dark. His bare-handed touch now instantly lethal, Rukh seeks delusional revenge on people he perceives to be enemies, including the kindly Dr. Benet (Bela Lugosi, the good guy for once). But the Radium X poisoning takes its toll before everyone is murdered, and Rukh’s mind clears as he reaches critical mass. Leaping from a high window, Rukh erupts in a flash of flame and smoke. 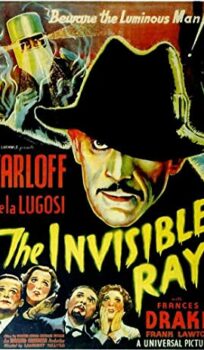