Will (Logan Marshall-Green) is invited to the home of his ex-wife, Eden (Tammy Blanchard), and her new husband in the canyons of Los Angeles.  He has lost touch with Eden and their mutual friends because he was dealing with the grief of their young son which caused their divorce.

It is revealed that Eden met her husband on a retreat in Mexico for a cult called The Invitation, which brainwashes people into forgetting their traumatic experiences; two of the invitees are also cult members.  Will becomes suspicious that the cult is planning something dangerous but when he attempts to warn the others, they suspect he is acting out from grief, being back in the home he used to share with his now deceased son.

In the end, Will’s suspicions are proven right and the four cult members were planning on poisoning everybody with wine.  Will keeps all but one person from drinking so the cult members venture out to kill each and every party guest, along with themselves, so they can pass over into another world.  Will, his girlfriend, and one of his friends survive and they learn that the same mass suicide was being carried out by every cult member on the same night. 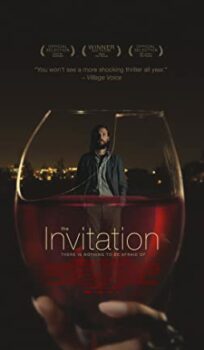