Frank (Robert De Niro) begrudgingly accepts from Russell (Joe Pesci) the task of murdering Hoffa (Al Pacino), since his existence has become a liability for the crime families. He reunites with Hoffa at a diner in Detroit and convinces him that the meeting with Provenzano (Stephen Graham) and Giacalone (Patrick Gallo) has been moved to a house; Hoffa’s foster son Chuckie (Jesse Plemons) and local thug Sal Briguglio (Louis Cancelmi) tag along. Once they make it to the house, Frank and Hoffa go in; Hoffa notices the house is empty and desolated and tries to walk off, but, then, Jimmy shoots him dead and leaves. Later, two other thugs burn Hoffa’s body, along with the murder weapon, in a crematorium, to eliminate all evidence.

When Hoffa is reported as missing and makes the news, Frank is seen trying to comfort Josephine (Welker White) over the phone; at the same time, Frank’s daughter, Peggy (Anna Paquin), realizes he must’ve had something to do with what happened to “Uncle Jimmy” and completely cuts him out of her life.

Everyone who ever had something to do with Hoffa either ends up getting killed or dying in prison. Russell and Frank, themselves, are jailed as well; Russell suffers a debilitating stroke and eventually dies, while Frank’s own health worsens gradually and he finds himself bound to crutches and, finally, to a wheelchair. He attempts to make peace with the terrible deeds he undertook in his life, although he even admits to a Priest no real remorse but, instead, “that it was all business” and he won’t tell the authorities, when questioned, anything about what happened to Hoffa. His own wife, Irene “Reenie” (Stephanie Kurtzuba), dies of lung cancer and only one of his daughters, Dolores (Marin Ireland), seems to be reluctantly willing to relate to him.

The final scene of the movie shows Frank, in the company of no one, sick and wheelchair-bound, in a nursing home, accepting his fate of most likely dying alone. 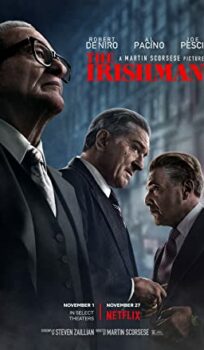