After Mansley (voice of Christopher McDonald) tricks the Army into firing a nuclear weapon to destroy the Giant (voice of Vin Diesel), the Giant takes off into the stratosphere and sacrifices himself in order to save Hogarth (voice of Eli Marienthal) and the rest of the town from the explosion. Months later, General Rogard (voice of John Mahoney) sends Hogarth the only piece of wreckage that they were able to recover. That night, Hogarth finds his piece of the Giant knocking on his window, trying to get out: the Giant is re-assembling himself in Iceland.
And thank you to J. Williams: even through I didn’t use your prose, I did appreciate the reminder that it wasn’t on the site! 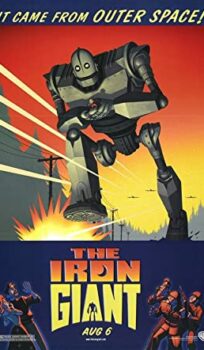