Sir Anthony Ross is a wealthy British noble, who wants to search for his son, Donald.  Donald was lost on an Arctic exploration trip.  Ross hires archeologist Prof Ivarrson to help search and buys the largest hot air balloon in the world to travel.  When they follow his trail, they reach an unknown island off by itself in the north sea.  The island rests over a dormant volcano, and is much warmer than the surrounding ice covered arctic.  They find a village of Vikings who have been living isolated on the island for 1000 years, with no outside contact.  The Vikings believe that other than their island the whole world is uninhabitable frozen tundra.  It is their policy to kill any outsiders, to prevent invasion from the outside frozen world.  The chief’s daughter is in love with Donald.  He has not been killed due to an ongoing power struggle between the chief and the Godi (like the warlock or magician of the Vikings).

Through the daughter’s help, they escape with Donald in the balloon.  The Godi shoots a flaming arrow that destroys the balloon.  The burning balloon lands on the Godi, killing him.  The chief wants to let them go, however the rest of the village insist that one outsider must remain as a hostage to prevent invasion.  As Ross and Donald argue over who will stay to free the other, the archeologist announces he wants to stay.  He would like study the Vikings and learn their language. 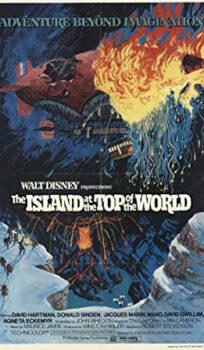