Lincoln Six Echo (Ewan McGregor) and Jordan Two Delta (Scarlett Johannson) track down Tom Lincoln, the millionaire Lincoln was cloned from. He tries to send Lincoln Six Echo back but in the scuffle, Lincoln Six Echo tricks Laurent (Djimon Honsou) into killing the real Lincoln. He returns to Lincoln’s house. Meanwhile, Merrick (Sean Bean) discovers that the clones are starting to inherit the memories of their “sponsors” and starts plans to destroy them all and start over. Lincoln impersonates Tom, and Jordan allows herself to be captured so they can infiltrate the facility. With the aid of Laurent, who’s turned on Merrick, Jordan frees some clones while Lincoln manages to destroy the holographic projector surrounding the complex, exposing the real word to the clone inhabitants and letting them free. Merrick is killed in the destruction and the film ends with Lincoln and Jordan on a boat heading to a real tropical island. 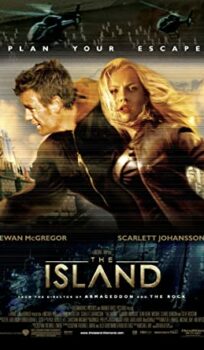