Jack Starks (Adrien Brody) is a war veteran accused of murder and sent to a mental hospital instead of jail due to his delusions, hallucinations and bouts of amnesia. Part of his treatment is to be placed in a strange strightjacket and entered into a morgue drawer by Dr. Becker (Kris Kristofferson). Inside this morgue drawer, he somehow travels to the future and meets Jackie Price (Keira Knightley) whom he claims to have met when she was a child. He snoops around her house while she is passed out and finds pictures and dog tags. She tells him it is the year 2007 and he tells her he has met her and her mother before. She freaks out and tells him that Jack Starks died in 1993 and it cannot be him and that her mother died falling asleep with a burning cigarette.  She kicks him out and he awakens as he is pulled out of the morgue drawer by Dr. Becker (which is supposed to be the year 1992). Dr. Sorenson (Jennifer Jason Leigh) tries to help him rather than hurt him as Dr. Becker is doing, but he is continuously send back to this morgue drawer. Each time, he meets up again with Jackie and together, they work to solve the mystery of Jack’s death. He asks Jackie what her address was as a child and he has Dr. Sorenson take him to the address in 1993 to write a letter to her mother about how she will die and to try to change the future. He does. The mother does not die. At the close, we see this happen all over again, but Jackie is not depressed this time (and she does not know him) because her mother has lived. 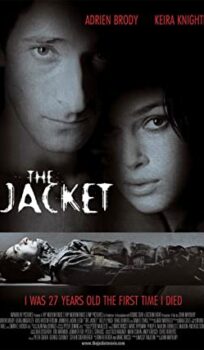