Mowgli runs away from the wolf pack after scaring off the game during his first hunt. Lured to Monkey town by a group of monkeys who are conspiring with Shere Khan, Mowgli is trapped within a hut full of mysterious items which remind him of his old home with men. Among them are a box of matches and a book of jungle creatures. Baloo and Bagheera free him and escape.

Shere Khan races to Monkey Town but is confronted by Raksha who won’t let him go further. He attacks and kills her, but when he finally reaches the hut where Mowgli was imprisoned, Mowgli is long gone.

Mowgli returns to the wolf pack, only to discover that his mother is dead. Blaming himself for what’s happened, Mowgli runs away again. He ends up in a village of humans who welcome him, but when he hears Little Raksha’s howls, he turns back to free her from a bear trap. Convinced by his sister that Shere Khan will hunt him wherever he goes, Mowgli decides to face his enemy, now realizing that running away is not the answer.

Mowgli sets a trap for Shere Khan and surrounds him within a ring of burning wood. Passing judgement on the tiger for his crimes against the wolf pack, Mowgli banishes Shere Khan, burning his picture in the book he found in the hut earlier as a warning should he return. Reluctantly agreeing with the terms, Shere Khan retreats after Mowgli allows him to escape.

The three wolves who shunned Mowgli throughout the movie finally come to respect and accept him. Mowgli declines the offer to return to the pack and become their new leader, instead he bestows the honor upon Little Raksha. Mowgli leaves for parts unknown after parting ways with his friends in search of a new adventure. 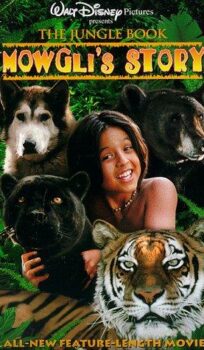