Pooper:
Alex and his knights become worthy of their destinies and unite their schoolmates to destroy the forces of Morgana LeFay. Merlin tells them that their battle was the most impressive he had seen and that they have the power to keep changing the world as adults.

Long Ending:
Many years ago in Britain, King Arthur pulled a magical sword from a stone and converted his enemies into his faithful knights of the round table. Aided by the wizard Merlin (Patrick Stewart), Arthur and his knights defeated the evil sorceress Morgana LeFay (Rebecca Ferguson) and trapped her in the center of the Earth. Arthur served as an honorable and chivalrous king and ushered in an age of peace. But as world leaders have become less honorable and chivalrous, and humanity becomes more divided, Morgana awakens and begins breaking free of her bonds.

Alex (Louis Ashbourne Serkis) is a geeky, undersized high school freshman who is constantly picked on by school bullies Lance (Tom Taylor) and Kay (Rhianna Dorris). One night, the bullies chase him to a construction site. He comes upon a sword embedded in a rock and pulls it out before fleeing home. Alex’s best friend and fellow geek Bedders (Dean Chaumoo) comes over and jokes that the sword must be King Arthur’s sword. After Bedders leaves, Alex pulls out an old book his absent dad left him about King Arthur that is inscribed “To Alex, my once and future king.”

The removal of the sword awakens Merlin, who seeks out the new wielder of the sword. He disguises himself as a teenager (Angus Imrie) and tries to convince Alex he is chosen to lead the impending battle against Morgana. Alex ignores Merlin, but is attacked that night by an undead soldier loyal to Morgana. Now believing Merlin, he seeks the wizard out. Merlin tells him that only individuals knighted by Alex can see Morgana and her forces and help fight her. Morgana can only attack at night, and Merlin can only aid him in daylight (his powers and lifeforce are diminished at night). Morgana’s powers will be strongest during an upcoming solar eclipse and Alex must try and defeat her before then.

Although Alex initially refuses to fight, he is inspired by his dad’s inscription. He knights Bedders and, later, Lance and Kay (who think it is a lame joke, but want to fight with the swords) as they are the strongest kids he knows. Eventually they all agree to join Merlin on a quest to Morgana’s castle (conveniently located where Alex believes his dad lives). Alex’s mom forbids the journey, but he runs away from her. Along the way, Merlin teaches the kids how to fight and tutors them in the ways of honor and chivalry. Lance and Kay initially are selfish and bullying, but eventually come to respect Alex and Bedders . Although Bedders is physically weak, he proves adept at magical spells. They arrive in the town where Morgana’s castle is as a united group of warriors who survived several attacks by Morgana’s undead army.

Before they go to confront Morgana, Alex goes to visit his dad. His long lost aunt (his dad’s sister) answers the door and explains that Alex’s dad was a drunk who abandoned him. When Alex shows his aunt the inscription in his book, the aunt explains that the inscription is in his mother’s handwriting (and his mom said it was his dad’s inscription to hide the truth and make Alex feel better). Alex threatens to abandon the mission, but is convinced by his friends and Merlin to stay the course. The four warriors go into Morgana’s castle. She turns into a horrible dragon creature and fights them. The kids wound Morgana, but flee before ensuring her demise.

The warriors return home, thinking they were successful. Alex reconciles with his mother and they promise to love and be truthful to one another. The kids eventually realize Morgana still lives and that the eclipse is in mere hours. They go to their school and eventually convince all their classmates to be knighted and join Alex in battle. Bedders and Merlin use magic to duplicate armor and swords for the students and Kay and Lance train them how to fight. During the eclipse, Merlin can also aid them as it is neither night nor day.

When the eclipse occurs, Morgana and her undead army attack the school. The students’ traps and training overcome her army and eventually, Alex lands a killing blow on Morgana. The students celebrate as Alex, Bedders, Kay, and Lance accompany Merlin to a lake to return Excalibur. Merlin says in his centuries of life, he never witnessed a braver or better fought battle. The kids express their concern that the world is still a fractured place and Merlin responds that the younger generation has proven itself and will become nobler and better leaders for the world. 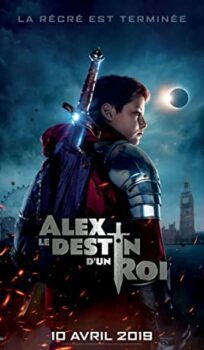