Everyone finds out about the affair Jules (Julianne Moore) and Paul (Mark Ruffalo) had and the family begins to fall apart. Nic (Annette Bening) makes Jules sleep on the couch, and it is uncertain whether or not they will stay together. Joni (Mia Wasikowska) tells Paul she is disappointed that her father couldn’t have been a better person, and Laser (Josh Hutcherson) avoids him completely.

Tanya (Yaya DaCosta) comes onto Paul at work for one of their little trysts, but he tells her that he is tired of flings and wants a real relationship. Meeting Joni and Laser showed him how much he wanted a family.

Jules, Nic, and Laser drive Joni to college. She insists that they give her some time by herself in her new dorm. She begins setting herself up but soon runs after her family, only to find that their car is gone. But it turns out that they didn’t leave, they had been forced to move the car. Joni gives them all a tearful goodbye, implying that she isn’t mad at her parents anymore.

In the car on the way home, Laser tells Jules and Nic that he doesn’t think they should break up. They ask why and he jokes that they’re too old. They all laugh, and the movie ends as Nic takes Jules’ hand, implying that they will stay together. 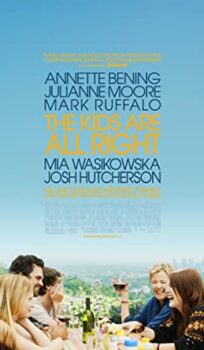