A great little TV movie (directed by Don Siegel) that was judged as being so violent they pulled it from the schedule and it found a theatrical release instead.

John Cassavetes is killed by contract killers Lee Marvin and Clu Gulager. Curious as to why he took it so passively, the two killers investigate. They uncover a million dollar mail theft orchestrated by (gasp, future president) Ronald Reagan in his last movie role. Femme fatale Angie Dickinson double crossed Cassavetes, and she took off with Reagan and the money. After learning all this, the killers decide they want the money and then the bullet fest begins. Reagan kills Gulager, Reagan wounds Marvin, Marvin kills Reagan, Marvin kills Dickinson and then Marvin dies from his wounds. 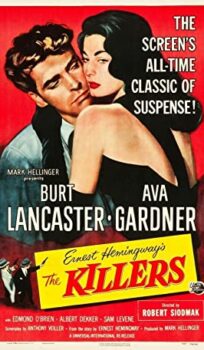