Redmond resident/school teacher Steve Wiebe manages to top Billy Mitchell’s world record in the video game Donkey Kong by roughly 100,000 points. However, Twin Galaxies doesn’t acknowledge the high score, due to the use of a “questionable” board in the game. Wiebe sets out to prove he can do it, visiting the Funland arcade in California and setting the score record there.

However, a videotape from Billy Mitchell arrives showing him getting an even higher score on the game. Despite questionable “fuzziness” on the tape, Twin Galaxies acknowledges his high score instead of Wiebe’s.

Wiebe tries at another tournament to top the score, barely acknowledging an elusive Mitchell as he and his wife walk in and out of the gaming center. He fails to do it, but Twin Galaxies acknowledges his efforts anyway, saying his future submittings will be accepted.

It appears Mitchell is on a course to get in the Guinness Book of World Records. However, by movie’s end, Wiebe tops his high score at his house, receiving a plaque acknowledging that he is, in fact, the King of Kong.

NOTE: It’s noted in the DVD extras for The King of Kong that Mitchell has once again taken the high score record, and Wiebe’s been trying to catch up with it ever since. The war continues… 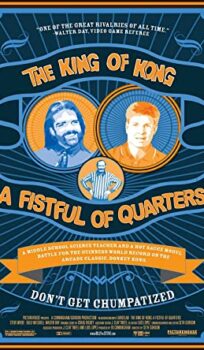