When an American facility is bombed in Saudia Arabia (the Kingdom), a team of FBI specialists headed by Fluery (Jamie Foxx) manages to maneuver around the bureaucrats to travel there and investigate the site. With the help of the Saudi Colonel Al-Ghazi, they manage to locate and kill several of the men responsible for the blast. The US government, fearing the team will be killed if they remain in the Kingdom, call it a victory and arrange to ship them back home even though the Team and Colonel agree the men they killed were underlings and other attacks are likely being planned.

As they drive out of town their convoy is attacked and Adam (Jason Bateman) is kidnapped. An impressive chase begins as the Team tries to rescue him. Janet (Jennifer Garner) shoots his captors before they can videotape his death and frees him. They kill the ringleader of the bombing attacks, but Al-Ghazi is shot and killed by a teenage boy.

The Team heads back to the US bloodied and shocked. As the film ends Fluery repeats a message of comfort he gave to Janet at the start of the film (her mentor was killed in the original blast), promising that they would “kill them all”. As he does so, we see the granddaughter of the slain bomber repeat the same message, whispered to her by her grandfather as he lay dying in her arms. 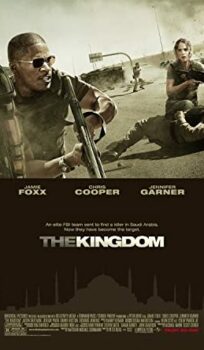