Shortly before his coronation, King George VI (Colin Firth) confronts his unorthodox speech therapist Lionel Logue (Geoffrey Rush) with his recently discovered knowledge that he is unlicensed.  Logue responds by saying that he received all the experience he needed by treating traumatized Australian veterans following the first World War.  Logue convinces King George to keep him on after he sits in St. Edward’s chair, which results in an angry, yet well-spoken, response by King George.

Shortly after the coronation, the revelation comes that England is on the verge of war with Germany and King George has given a speech over the radio.  With Logue in the room guiding him, King George is able to say the speech with hardly any stuttering.

Titles at the end state that Logue remained King George’s speech therapist, and friend, for the rest of their lives. 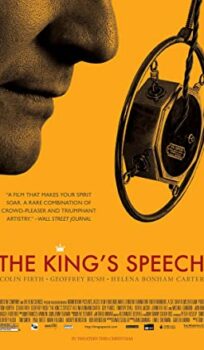