After being rejected by Charles (Henry Fonda), Jean (Barbara Stanwyck) has her revenge on the rich and naive Charles by pretending to be the high-class, British “Eve.” “Eve” and Charles marry, but on their wedding night “Eve” shocks Charles with stories of her sexually promiscuous past. Charles is disgusted and leaves “Eve.” Jean can now finally get her big divorce settlement, but instead she refuses to take any money and begs to see Charles one more time. Before their divorce is finalized, Charles again boards a ship and runs into Jean, now without her “Eve” disguise. Charles and Jean are happily reunited. Charles confesses that he is legally still married (to “Eve”), but Jean tells him that she is married as well, and the husband and wife push the cabin door shut. 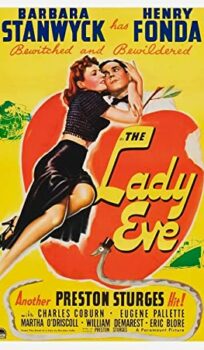