Young doctor Nicholas Garrigan (James McAvoy) comes to Uganda to “make a difference”, but more importantly, to get away from his father in Scotland.  He is soon charmed by Idi Amin (Forest Whitaker), who had just taken power via a coup.  Amin is, at first, very popular with the people, promising to build a new nation.  Dr. Garrigan soon became Amin’s personal physician.  Dr. Garrigan enjoys the life of luxury in Uganda, having fun, even ends up sleeping with Amin’s third wife, Kay (Kerry Washington).

Soon, however, Amin’s erratic behavior, including paranoia, random outbursts, etc. scares Dr. Gerrigan.  Dr. Gerrigan finally realizes the monster Amin is when a British diplomat shows him pictures of numerous people executed under Amin’s orders, including the Minister of Health in Uganda, which Dr. Garrigan mistaken thought was betraying Amin.

Soon after, Kay ends up being killed and dismembered.

Dr. Garrigan attempts to assassinate Amin by giving him a bottle of poison pills, but that plan falls apart as one of Amin’s aids ordered a solider to take the pill first, and Dr. Garrigan runs out to stop him.  He is tortured at the Entebbe International Airport, while the hostage crisis of Flight 139, which the PLO took hostages, was taking place (an actual event).  As Amin’s aides were out for a break while Dr. Garrigan was strung up, Dr. Junju (David Oyelowo) frees him, and arranged him to be put on a plane, asking Dr. Garrigan to “tell the truth about Amin”.  The plane was intended for hostages of Flight 139, as a part of Amin’s arrangement, to fly out of Uganda.  Amin’s aids discovered this, executes Dr. Junju, but it is too late as the plane flys out with Dr. Garrigan onboard.

The end of the movie shows actual footage of Idi Amin, and I gotta say, Forest Whitaker knocks this one out of the ballpark!  It’d be a shame if he doesn’t win the Oscar! 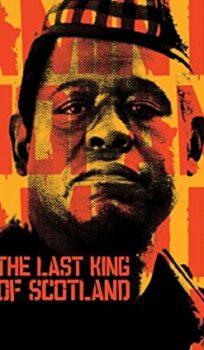