After Clinton’s (James Coburn) untimely demise in the monastery on the second night of the game, the six players, led by struggling screenwriter Tom (Richard Benjamin), assemble in the game room to figure out what happened.  Apparently, the purpose of The “Sheila Green Memorial Gossip Game” was to uncover secrets held by the actual players, with each person’s real secret assigned to a different player.  (As Tom notes, if everybody had had their own secret on the first day, no one would have played at all.)

It is revealed that the six secrets were:

After the first four secrets are assigned to their real holders, Lee is driven to confess that she had accidentally killed Clinton’s wife Sheila the year before while speeding drunk.  When she realized the purpose of the game was to reveal people’s hidden pasts, she snooped and discovered her husband’s killer card.  Upon finding Clinton in the monastery, she confronted him, he taunted her and she assaulted him with the candlestick, killing him.  After confessing to the two crimes, she retires to her cabin and kills herself in the night.

The next morning, most of the guests decamp for a local hotel and the crew departs for some much-needed shore leave, leaving Philip alone on the yacht.  Not entirely satisfied, he continues to investigate and is experimenting with cigarette butts (one odd one had been found at the Clinton crime scene) when Tom returns for a chat.  With Tom temporarily out of the room searching for hand puppets, Philip notices the snapshot Clinton had taken that first day.

He observes that the six guests were each positioned under one letter of Sheila’s name and that he and Alice were positioned in the S & H positions, corresponding with their faux secrets, shoplifter and homosexual.  He puts together that Clinton had intended for the answer to each night’s hunt to be glaringly obvious, staring at them every day from the corkboard where he had posted the photo.  The problem is that last entry, the hit-and-run killer.

Philip deduces that that final secret was supposed to be something relatively mundane and long in the past, as was everybody else’s secret, that Lee’s secret was presumably supposed to be an “a” secret, probably “alcoholic.”  He remembers that Tom had crumpled his card on the first day, but that the “hit-and-run killer” card was smooth.  Tom had replaced his original secret with another secret of his wife’s, a more serious secret that he could use to frame her for Clinton’s murder.  (Clinton had optioned Tom’s dream project a couple years before and now not only refused to make it, but also refused to sell it back to Tom.  He had been unable to write anything new since and was subsisting on rewrites for spaghetti westerns.)

Tom had actually killed Clinton with the missing ice pick, and then propped up Clinton in the confessional booth, imitating his voice to convince Lee that Clinton was still alive when she arrived.  She only thought she had killed him and Tom staged the scene to make it glaringly obvious that Clinton had been murdered.  Tom had drugged the bourbon Lee had been drinking the night she confessed and later hauled her into Clinton’s bathtub and slit her wrists, making it appear a suicide.  His motive was her large estate ($5 million) that he could use to bankroll his dream project and freedom from a wife he’d grown tired of (he was having an affair with Alice).

Philip realizes just a shade too late that Tom was the mastermind behind the whole thing and attempts to escape the lounge, finding to his horror that Tom has locked all the doors.  He is attacked by Tom, who uses the hand puppets in lieu of gloves.  Christine, who had returned to the boat with a randy crew member, was listening in on the whole conversation in Clinton’s cabin and saves Philip just in the nick of time.

Clinton had rigged the entire ship for his eavesdropping pleasure, resulting in a recording of Tom and Philip’s final chat.  Christine and Philip propose that they make Clinton’s film, The Last of Sheila, his late wife’s biopic, starring Alice, directed by Philip, utilizing Lee’s estate.   They’ll bring in fresh blood to write the script, only allowing Tom to serve as technical advisor and maybe do some rewrites.

(One final loose end is that Philip had been responsible for the other attempt on Clinton’s life, by turning on the yacht’s propellers while he thought Clinton was in the water behind the boat.) 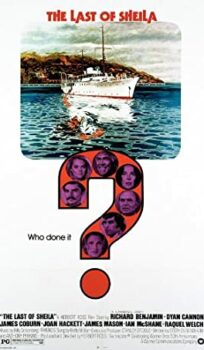