Sam The Lion (Ben Johnson), a well-liked business owner and fatherly figure to most of the local boys, dies of a stroke and, in his will, he leaves the pool hall to Sonny (Timothy Bottoms); the cinema -or “picture show”, as it was known in town-, to Miss Mosey (Jessie Lee Fulton); the café, to Genevieve (Eileen Brennan); and $1,000 dollars, to Joe Bob (Barc Doyle) -who is later arrested as a pedophile, for attempting to abduct a child-.

Jacy (Cybil Shepherd) toys with the affections of both Sonny and her long-time, on-off boyfriend Duane (Jeff Bridges), which eventually leads to them fighting over her and Sonny sustaining an injury that causes him to lose his left eye; also, as a result of this, Duane joins the Army and gets summoned to fight in the Korean War. Nonetheless, Jacy and Sonny later elope, only to be hauled back, by a State Trooper, to Jacy’s parents, to force them to dissolve the marriage.

Duane and Sonny get together one last time, before the former’s impending shipping off, at the cinema, which is being shut down forever -a clear indicator that the changing times were already taking their toll on the town-. The next day, both friends say their goodbyes and Duane departs. While tending to his vacant pool hall, Sonny notices a commotion of people around a cow truck; upon noticing the broom Billy (Sam Bottoms, Timothy’s real-life younger brother) always used for sweeping, he runs to the place, only to discover that Billy was run over and killed; he lashes out at the lookers belittling the dead kid and, distraught, carries his corpse away.

After this, Sonny tries to reacquaint with Ruth (Cloris Leachman), whom he had broken up with upon getting together with Jacy, for comfort. She has a meltdown and berates him for his attitude towards her and her feelings for him; but, when she sees his despondence and sorrow, she takes his outstretched hand, saying: “Never you mind, honey; never you mind”, thus indicating she was accepting him back. Sonny embraces his fate of being tied to the dying town for the rest of his life and not doing anything elsewhere, unlike the rest of his already-gone childhood friends.

The final images show a totally desolate and derelict-looking Main Street, with a lingering shot of the “picture show”, as a symbolism of the rapid transformation the post-World War years brought along, drastically altering some places, sometimes to the point of becoming ghost towns. 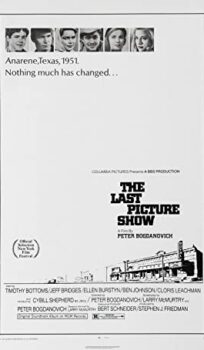