Ray Owens (Arnold Schwarzenegger) is an aging sheriff in the tiny border town of Sommerton, Arizona enjoying his day off, however things quickly go south when he is summoned to investigate the murder of a local farmer.  Sheriff Owens suspects a couple of out-of-town truckers he noticed acting suspiciously in a diner earlier, and when his team of deputies follow tire tracks from the farmer’s house towards a canyon, they are engaged in a vicious firefight that leaves one of Sheriff Owens’ deputies dead.

Simultaneously in Las Vegas, feared Mexican cartel leader Gabriel Cortez (Eduardo Noriega) escapes from FBI custody with the help of an FBI mole, comandeering a stolen modified Chevrolet Corvette ZR1 to drive to Sommerton where, unknown to Sheriff Owens, the gangsters who murdered the farmer are constructing a makeshift bridge in a nearby canyon on the farmer’s land that will allow Cortez to safely and quickly cross his way into Mexico.

Warned by the FBI (Forest Whitaker) that Cortez is speeding his way to Sommerton with no help on the way, Sheriff Owens decides to make a last stand against Cortez and his team as revenge for the death of their deputy.  Sheriff Owens enlists the help of a former soldier-turned-drunk loser named Frank Martinez (Rodrigo Santoro) and town kook and gun fanatic Lewis Dinkum (Johnny Knoxville) for firepower, along with his two remaining deputies.  The team places cars and obstacles around town to prevent Cortez from driving through.

Sheriff Owens and his team engage in a battle with Cortez’ thugs, managing to kill them all although Dinkum and Deputy Figuerola (Luis Guzmán) are shot and injured.  Cortez manages to drive through Sommerton, though Sheriff Owens trails behind in a local’s Chevrolet as well, chasing Cortez through a cornfield that hinders’ both of their views and results in both of them getting into a car accident.  Cortez reaches the compelted makeshift bridges, only to be stopped by Sheriff Owens. The two brawl with Owens being the winner.  The FBI arrive in Sommerton and arrest Cortez, the FBI mole, and congratulate Owens and his team for a job well done. 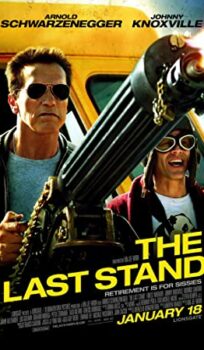