SHORT VERSION:
Using a prototype advanced Gunstar, Alex and Grig head for the Frontier to hit Xur and the Ko-Dan armada with a surprise solo attack, since the villains believe that all of the Starfighters were killed when they earlier assaulted their base and Xur assumed that the Zando-Zan assassin they sent to Earth to kill Alex had succeeded (Alex’s Beta unit copy – left on Earth to make it seem like Alex was still there – killed the assassin, though he destroyed himself doing so). They attack the armada’s command ship just as the fleet starts heading for Rylos and destroy its communications turret, and after the armada’s commander Lord Kril finds out that the attacking ship is a Gunstar, he reaches his breaking point with Xur and orders him locked in the brig. However, on the way there, Xur is able to get free and flee in an escape pod.

Alex and Grig end up using the Gunstar’s Death Blossom weapon to wipe out every ship except for the command ship. When the command ship then tries to ram them, Alex shoots and badly damages its guidance controls, causing it to fall into the gravitational pull of Rylos’ moon and get destroyed. Alex and Grig land on Rylos to a hero’s welcome, and Alex is convinced by Enduran to stay and rebuild the Starfighter Legion since the Frontier is down and Xur is still at large.

However, Alex first makes a return trip to his trailer park community on Earth, with Grig joining him. After Grig lets the residents know of Alex’s heroic deeds, Alex tells Maggie – who came to learn of Alex’s mission through the Beta unit – that he came back because he wants her to join him since he doesn’t know when his next visit to Earth will be. After getting her grandmother’s blessing, Maggie takes off into space with Alex, and Alex’s younger brother Louis begins to play the Starfighter arcade game in the hope that he can join him one day.

LONG VERSION:
After getting the full scope of what is expected of a Starfighter and what the Star League is up against, Alex (Lance Guest) becomes intimidated by it all and refuses to take the job. He has Centauri (Robert Preston) take him back to Earth, but after they leave the Starfighter base, Xur (Norman Snow) and the Ko-Dan armada fire meteors through a hole they create in the Frontier that head straight for the base. Shortly afterwards, a spy of Xur’s destroys the facility’s repulsor guns as they are trying to blow up the meteors, deactivating them and allowing other meteors to strike the base and inflict heavy damage, which results in the deaths of all of the Starfighters except for Grig (Dan O’Herlihy) and the total destruction of the Gunstar ships. Xur is initially overjoyed with these results until he receives word that one Starfighter from Earth remains, so he dispatches a Zando-Zan assassin to Earth to eliminate him. Meanwhile, after Centauri lands on Earth a few miles from Alex’s trailer park community, Alex says farewell, but Centauri gives him a communicator to contact him in case he reconsiders. Alex tells him that he just can’t be a Starfighter because he is simply a kid from a trailer park, but Centauri replies that, if that is what he thinks, then that is all he will ever be.

When Alex returns home, he meets the Beta unit copy of him that Centauri left behind, and he decides to go out and contact Centauri so he can come and get this Beta unit. However, just after he sends the signal out, he gets attacked by the Zando-Zan. Centauri arrives moments later and engages in a gunfight with the Zando-Zan that results in the enemy alien being killed, but Centauri is gravely wounded in the process. Alex decides to go back to the Starfighter base with Centauri and take on the role he was recruited for after Centauri and Beta – who arrived in the midst of the fight – warn him that more Zando-Zans will be coming to finish the task, and it would be best if they targeted Beta to give off the impression that Alex is still on Earth.

Alex and Centauri arrive at the base and see the state it is in, and after meeting with Grig in the docking bay, Centauri is overwhelmed by his wound and (apparently) dies. Grig takes Alex to a hangar and shows him an advanced prototype Gunstar that survived the assault, and they both step aboard it. After Grig gives Alex a complete rundown on the ship’s weapons and controls and informs him of the collective fate of the other Starfighters, they decide to head straight for the Frontier, intending to find a way to hit the Ko-Dan armada with a surprise (and evidently suicidal) solo attack. Beforehand, he gives Alex some training and convinces him to accept the responsibilities of being a Starfighter before they hide inside a meteor close to the armada to await their opportunity to strike.

While Beta is on a date with Alex’s girlfriend Maggie (Catherine Mary Stewart) the following night, he eventually confesses to her that he isn’t Alex. Suddenly, another Zando-Zan – disguised as a highway patrolman that it killed – shoots him from afar, exposing damaged circuitry and confirming this truth to her. The Zando-Zan then flees back to the base it set up outside the trailer park to inform the Ko-Dan armada’s command ship that the Alex on Earth is an imposter, and Beta makes off with Blake’s (Peter Nelson) truck to intercept him. Maggie comes along, wanting to know more, so he gives her the full scoop on Alex and his whereabouts. Just as the Zando-Zan reaches its base and starts to communicate a message that begins with “the last Starfighter…”, Beta has Maggie jump out of the truck and then drives it into the communicator, destroying it, the Zando-Zan, and himself. Xur assumes that the Zando-Zan was trying to tell them that it succeeded in assassinating Alex, so he orders for the invasion of Rylos to commence.

Alex and Grig watch the armada pass overhead and then see the command ship behind them, so they come out of hiding and head straight for the communications turret. When the Ko-Dan commander Lord Kril (Dan Mason) discovers that the ship approaching them is a Gunstar, he reaches his breaking point with Xur, relieving him of his command and then having him dragged off to the brig before ordering all guns to fire on the Gunstar. Alex destroys the turret, and in a subsequent attack on the command ship, Xur is able to get free and affect a getaway in one of the escape pods. Just as the armada nears Rylos, Alex and Grig come up behind them, and Alex suggests to Grig that they wipe out the enemy vessels using the Death Blossom weapon. Grig warns him that it fires only one massive volley at close range, and since it has never been tested before, they run the risk of overloading the systems and blowing up the ship. Alex decides that they will have to chance it, so he fires at the Ko-Dan ships until the basic weapons are depleted of energy, and when the armada gets close enough, he activates the Death Blossom and obliterates them all. The command ship remains, however, and Kril decides to use whatever power is left to ram the Gunstar. Grig re-routes power from the life support system to the weapons, enabling Alex to start blasting again and critically damage the command ship’s guidance controls. The ship falls into the gravitational pull of Rylos’ moon and is destroyed.

Alex and Grig land on Rylos and are hailed as heroes, but Enduran (Kay E. Kuter) reminds them that, despite their victory, the Frontier is now down and Xur is still at large. He asks for Alex to stay and rebuild the Starfighter Legion, and assures him and Grig that they will have the help of an old friend. Centauri then appears, and he explains to Alex and Grig that he actually didn’t die, but instead went dormant so his body could repair itself. After some thought and further encouragement, Alex decides to remain and help Rylos and the Star League.

Back at the trailer park, everyone is wondering where Alex is, especially his mother Jane (Barbara Bosson), but before Maggie can begin to explain things to them, Alex and Grig land in the Gunstar to everyone’s surprise. Alex comes down in the lift and kisses Maggie, and he tells everyone about how he has been to another world and that a Beta unit was posing as him while he was away. Grig then comes down and gets introduced to everybody, and he informs them of how Alex saved the Star League and hundreds of worlds, including Earth. He tells Alex that they have to leave, and Alex extends an invitation for Maggie to come with him, saying that she was the primary reason he came back because he doesn’t know when his next visit to Earth is going to be. Maggie is hesitant to leave both the trailer park and her grandmother behind and it seems like she won’t come along, so Alex kisses her goodbye and then bids everyone farewell before getting into the lift. However, Maggie gets her grandmother’s blessing to join him and hops into the lift with Alex. As the Gunstar heads back into space, Alex’s little brother Louis (Chris Hebert) begins to play the Starfighter arcade game in the hope that he can join his brother one day. 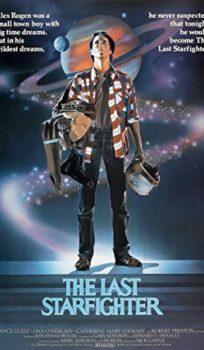