Pooper:
Amalthea is turned back into a unicorn, drives the Red Bull into the sea, and all the other unicorns are then allowed to return home. Although she experienced regret and sorrow over losing her human body and love for Prince Lir, she thanks Schmendrick for the opportunity to experience those emotions and returns home.

Long Ending:
Two hunters journey into a forest and realize that the forest is home to a unicorn (voiced by Mia Farrow). The unicorn’s presence means that it is always spring and that they will find no prey there. As the hunters leave the forest, they remark that this unicorn is the last of its kind. The unicorn questions a butterfly to see if the humans’ claim is true. The butterfly confirms that she is the last, and states that a gigantic red bull chased all the other unicorns away. The unicorn leaves her forest in search of the other unicorns.

The unicorn is captured by a witch named Mommy Fortuna (Angela Landsbury) who places the unicorn in her traveling sideshow. The unicorn befriends Fortuna’s servant, a sorcerer named Schmendrick (Alan Arkin). Schmendrick is a lousy wizard, but manages to pick the lock of the unicorn’s cage out and joins her on her journey. As the pair grow closer, the unicorn confides in him that as an immortal, she can never experience the emotions of love, sorrow or regret. They come across a group of brigands and Schmendrick realizes that he can conjure magic so long as he is a mere conduit for it (i.e., he lets the magic do what it wants rather than making magic do what he wants). The brigands discuss the kingdom where the Red Bull lives before trying to sell Schmendrick into slavery. Schmendrick and the unicorn manage to escape. They also befriend a woman named Molly Grue (Tammy Grimes) who also joins them on their journey.

The trio arrive at a kingdom ruled by the ancient King Haggard (Christopher Lee) and learn that the Red Bull lives under his castle. The Red Bull emerges and begins pursuing the unicorn. Schmendrick conjures up some magic that causes the unicorn to transform into a human woman. Unable to sense the unicorn any longer, the Red Bull returns to his home under Haggard’s castle. The unicorn weeps at her newly mortal body, saying that she feels like she is “dying” (i.e., aging) all the time. They give her the name Amalthea and walk up to Haggard’s castle.

King Haggard grants the trio entry into his castle. He lives virtually alone, with only his adopted son Lir (Jeff Bridges) living with him. Haggard is cold-hearted, finding joy in almost nothing. Haggard believes that Amalthea is a unicorn and allows the trio to live in his castle for amusement. Meanwhile, Amalthea begins forgetting that she is a unicorn (and if she stays in human form too long, she will eventually lose the ability to return to her unicorn form). Over the ensuing days, Amalthea and Prince Lir fall in love.

As time goes by, Haggard tires of his guests. He talks to Amalthea (who now has no memory of being a unicorn) and tells her that he controls the Red Bull. He says that the only thing that ever made him happy in life were unicorns. Thus, he convinced the Red Bull to drive the unicorns into the ocean that his castle overlooks. Because the unicorns are trapped in the ocean, only he gets to see them. He also says that he intends to drive Amalthea into the ocean too so he can control all unicorns. She flees to her friends, who tell both she and Lir that Amalthea is actually a unicorn.

The heroes find the hidden entrance to the Red Bull’s lair and are chased into it by Haggard. The Red Bull awakens and, this time, realizes Amalthea is a unicorn and pursues her. This breaks the spell and she returns to her unicorn form. As the Red Bull prepares to drive her into the ocean, Lir intervenes and is injured as he fights the Red Bull. Lir’s efforts inspire the unicorn to stand up to the bull and she manages to drive the Red Bull into the ocean. Once the Red Bull is defeated, the other unicorns stampede out of the ocean. The stampede causes Haggard’s castle to collapse and the debris crushes him. The newly-freed unicorns return to their homes.

Lir departs to go on more adventures, but not before thanking Molly and Schmendrick for their friendship and telling them to wish the unicorn well. Molly and Schmendrick also begin a romantic relationship. That night, the unicorn approaches Schmendrick to thank him for his help. She specifically says that, because of his turning her into a woman, she will be unique amongst all unicorns as in her mortal human form, she experienced love, sorrow, and regret. The unicorn then leaves to return to her home. 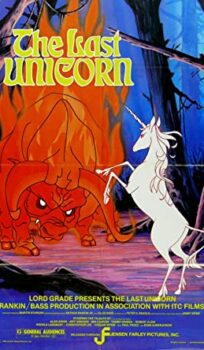