The movie opens with Henry Holland (Alec Guinness) sitting in the lobby of a luxurious hotel in Rio de Janeiro.  Various people come by to thank him for his generosity, and congratulate him on his lavish parties. He begins to explain to the gentleman seated next to him how he got here.

We flash back to Holland as a meek clerk working for the bank of England. Every Friday he accompanies the truckload of gold that leaves the bank.  His co-workers think he is stuck in that low position because he lacks ambition and initiative.  In a voiceover, he reveals that for years he has been plotting the perfect robbery, but still needs a way to get the gold out of the country.  A new lodger moves into his boarding house, Pendlebury.  Pendlebury owns a small company that makes small metal statues of the Eiffel Tower, which they ship to Paris.  Henry’s plan is complete. With Pendlebury, and 2 others, they will steal the gold.  At the factory, they can melt the gold, pour it in molds, and ship it out along with the regular statues.

The day of the heist is a hilarious mess.  Despite multiple mishaps, they manage to pull it off and get away with the gold.  Holland was left blindfolded, bound and gagged by his accomplices, and is considered a hero for the injuries sustained trying to stop the theft.  Little by little they ship the statues to Pendlebury’s business partners in France.  The French know nothing of the theft, but know the “reserve stock” of statues are to be held for Pendlebury and not sold.

Holland and Pendlebury arrive and discover that by mistake one of the reserve boxes has been opened and 6 of the gold statues have just been sold to a group of British schoolgirls on holiday.  Holland is obsessed that they must get these statues back. The 2 men chase them all over Paris but do not catch them there.  They know what school the girls go to, and return to London.  At the school they try to buy back the statues.  One girl won’t sell, and gives her statue to a police officer who is her friend.  Holland and Pendlebury enter the police station and try to steal the statue.  Their bizarre behavior leads to the discovery that the statue is made of the stolen gold.  The men run for it. Pendlebury is caught. Holland escapes on a boat to Rio.

We return to the opening scene in the Rio hotel.  Holland reveals that he arrived in Rio with the 5 gold statues he got back from the schoolgirls, and has been living like a king.  Holland and his companion rise to leave, and we see they are handcuffed together.  Holland has been recounting his adventure to the officer taking him back to England for trial.
. 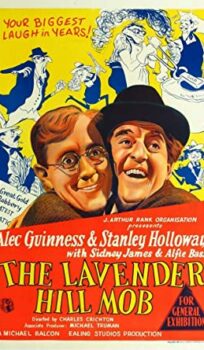