On the final hole and leading the match Ranulph Junah (Matt Damon) calls a 1 stoke penalty against himself , even though no one else witnessed it and several people including Hardy want him to ignore it and go on and win the match.

But having completed his rehabilitation and found ‘his seeing’ (himself) again Junuh insists on the penalty. Bagger Vance (Will Smith) seeing his work is done takes his “five dollar” and leaves into the sunset, telling Hardy to “Take the man home”

The match ends in a 3 way tie.

Junuh gets his life back and the girl , Bobby Jones gave up professional golf and went on to be a lawyer and Walter Hagen only played exhibition matches from then on.

(“Bagger Vance” and “R. Junuh” are representations of Bhagavan (Krishna) and Arjuna, from the Hindu text “The Bhagavad Gita”. The lessons learned by Rannulph are loosely based on those Krishna teaches to Arjuna while masquerading as his lowly chariot driver.) 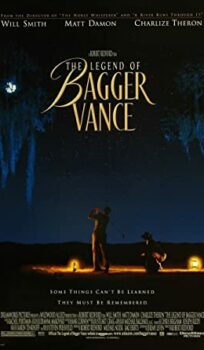