Billie Jean (Helen Slater) and Binx (Christian Slater) arrange to turn themselves in on their own terms at a crowded area at the beach. They both arrive in disguises; Binx is dressed like Billie Jean, and she is in the crowd. The police are also there with snipers. When Binx arrives with their “hostage”, Lloyd, and toy gun, Hubie runs up to them and recognizes him. Binx then accidently points the toy gun at him, and the police shoot Binx in the shoulder.

In the resulting pandemonium, Billie Jean is unable to reach her brother before he is carried away in an ambulance. The place where she stops running is nearby Mr. Pyatt’s (Richard Bradford) booth, where she sees how he has used her image to make money for himself. As a crowd gathers, she confronts him — even mentioning how he tried to come on to her earlier. He offers her the $608 (“more or less”) that he owed for the broken scooter in the first place, in order to shut her up and put everything behind them.

She refuses the money and knees him in the groin. As Mr. Pyatt falls, he knocks over a table and a lantern (or torch) that sets some of his merchandise on fire. As the fire spreads, he asks for help, but the crowd does nothing but stare. He walks off to get help as Billie Jean looks at the whole booth go up in flames — including the giant effigy of her pointing a gun. People from the crowd start throwing their Billie Jean merchandise into the bonfire. Billie Jean spots Lloyd into the crowd and kisses him before she walks away.

The scene shifts to a snowy roadside some time later; Billie Jean and Binx are hitch-hiking in Vermont (the place that Binx has always wanted to go to). Binx, wearing an arm sling, eyes a jet ski as he joins his sister. 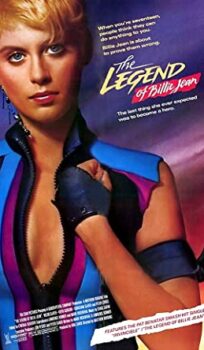