Pooper:
Batman returns the supervillains to the Phantom Zone with the help of Barbara, Alfred, and Robin, who he accepts as his son.

Longer:
This story introduces us to a much more arrogant Batman who is completely aware of his awesomeness and ability to beat villains effortlessly. After foiling yet another caper involving literally every single obscure and temporary villain from all incarnations of the Dark Knight, Batman hurts the Joker’s feelings by telling him he is not his worst villain. Joker devises a plot to truly get Batman’s goat.

While at a gala where he unwittingly agrees to adopt an orphan named Dick Grayson, Bruce Wayne becomes enamored of Jim Gordon’s daughter Barbara, to whom he passes the rank of police commissioner. Barbara suggests a new police task force that doesn’t need the help of Batman, which agitates Bruce. At that moment, though, the Joker and all of Gotham’s villains crash the party, but before Batman can stop them, Joker surrenders himself and (unknowingly) the rest of Gotham’s baddies, save for Harley Quinn, who disguises herself to return later.

Without any villains to fight, Batman decides that he should banish Joker to the Phantom Zone using the device in the Fortress of Solitude, which he steals with the help of Dick Grayson, who dons a Jamaican Batman costume known as “Rastaman” and reconfigures it into the traditional Robin costume. Dick manages to steal the Phantom Zone projector while Batman enjoys a Justice League party that he was not initially invited to, but is welcomed all the same.

Batman breaks into Arkham Asylum with Robin and sends the Joker to the Phantom Zone. Barbara, realizing what he has done, imprisons Batman and Robin (as his accessory) and confiscates the projector, but not for long as Harley (disguised as a prison scientist) steals it back. While in the Phantom Zone, Joker recruits several villains from Warner Bros. properties and LEGO sets, including Lord Voldemort, Sauron, King Kong, Jaws, the Kraken, the Gremlins, and the Wicked Witch of the West. When Harley releases them, they wreak havoc on Gotham, causing Barbara to realize that the city needs Batman’s help. She releases Batman and Robin, who are quickly joined by Alfred, who dons a 60’s Batman era suit. As Joker refuses to let the other Gotham villains join in his takeover, they all volunteer to help the caped crusaders. Batman eventually gives Barbara a Batgirl suit, and the four go to take on Joker and his new allies.

Batman realizes, after a trip to the Phantom Zone himself, that he should not work alone as he has a family to fight with. After foiling most of the villain’s plot, a bomb under Gotham goes off which will cause Gotham to fall into the eternal abyss if it is not saved, which the characters of Gotham do by connecting themselves together and bridging the gap forming between the two halves of the city. Batman makes amends with Joker by telling him he hates him, which reignites Joker’s interest in continuing to fight Batman, and the two work together, along with all of Gotham, to reconnect the city. Afterward, all villains, save Joker, are returned to the Phantom Zone.

Barbara accepts Batman as Gotham’s protector, Dick Grayson finds out that Batman (who reveals himself as Bruce Wayne) wants him for a son and partner, and Batman accepts his new family.

BEST PART FOR BATMAN MOVIE FANS: Billy Dee Williams does the voice of Two-Face (albeit for two lines, but it finally happened in our lifetime!!) 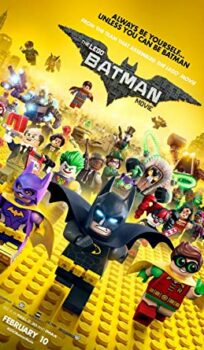