The entire story is an imaginative world made up by the son of “The Man Upstairs” (Will Ferrell, who also provides the voice of the main villain – Business, and Emmett is essentially the hero that the boy created for the story we’ve been watching).

When The Man Upstairs sees what his son has been doing with his LEGO sets (beautifully built into the many worlds we see throughout the story), he initially starts breaking it down, which we see happening from Emmett’s point of view as their side losing the battle. But the man realizes his son’s creativity, and chooses to help his son finish the adventure before Taco Tuesday for dinner. Emmett feels a symbiotic realization to the boy’s, and is returned to LEGO world with a newfound creativity of a Master Builder. The “relic” is given to Business, who caps the tube of KRAzyGLuE (kragle in the story), and the world is reborn as a new land where everyone can build as they please without the order of Business’s instruction-built world.

Meanwhile, The Man Upstairs tells his son that if he is going to let him play with the LEGO Universe, his sister needs to be allowed too. Next thing Emmett’s world knows, three beings drop in from “Planet Duplo” (LEGO set for ages 2-5, you under-rock dwellers!!).

One of the best feature-length toy commercials aside from the Transformers movies, and pretty much anything Disney has released in the last 20 years. 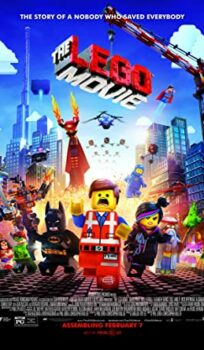