A remake of the Oscar-winning 1977 French film “Madame Rosa”, with Sophia Loren.

Longer version:
After Iosif (Iosif Diego Pirvu) moves away with his returning mother and Lola decides to reacquaint with her estranged father along with Babu (Simone Surico), Madame Rosa’s dementia episodes worsen to the point that she ends up being hospitalized, which she was against.  Momo visits her in hospital and is heartbroken when she momentarily doesn’t know who he is; he promises to do right by her for when “the end comes”.

He severs ties with “Spacciatore”, the drug dealer (Massimiliano Rossi), and, upon hauling a load of supplies from Madam Rosa’s apartment, he busts her out of the hospital, brings her back to her building and they take refuge in her basement’s secret room, together, while the Police unsuccessfully search for them.  They share a tender moment where he gifts her with a bouquet of fake mimosas and she holds the postcard of Viareggio for the last time.  Shortly after, she dies peacefully while hugging him.

Coming up to the scene where the film started, Lola returns with Babu and sees Momo, who runs off anguished and locks himself in the basement room.  It is revealed that he was watching the corpse of Madame Rosa, who presumably had already been dead for a little while.

The movie ends as Madame Rosa gets a funeral and burial, Momo places the postcard on her gravesite as bidding her farewell, he sees that lioness one final time -as if he would no longer need its protection and be able to move on with his life- and, smiling, goes off with Lola and her acquaintances. 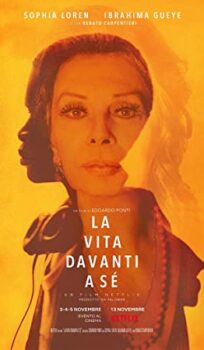