The Life and Death of Peter Sellers(2004)

Short Version:
Apparently Peter Sellers was a immature bastard with mommy issues; a creative genius who alienated everyone around him and whose talent came at great personal cost.

Long Version:
Peter Sellers (Geoffrey Rush) marries Anne (Emily Watson) and they have two children.  He has a successful career in radio and a happy home life. He makes the jump to film and eventually meets Sophia Lauren and falls madly in love with her. Convinced they are having an affair (though she will have none of him), he divorces his wife and abandons his family.

His career booms.  His mother, whom he is very close to, is so obsessed with his career that she does not call him when his father is dying because she wants him to finish his movie.  He comes just in time but he becomes estranged from her for a period.  He is impossible to work with and feuds with Stanley Kubrick (Stanley Tucci) as well as Blake Edwards (John Lithgow).  He eventually suffers a bit of a nervous breakdown, (saying he is consumed only by characters and has in fact no personality of his own), which he takes out on all those around him, including his children.

He meets and marries Britt Eklund (Charlize Theron), a young sexpot who adores him.  Six weeks into their marriage he has a heart attack: his heart stops 8 times.  He survives and decides that he will no longer do the imitations and characters he is so good at but are consuming him – he will be the “real” Peter Sellers.  But no matter what he does, people remain convinced he is being humorous.  Meanwhile his mother lies dying in the hospital, but when she calls to tell him, he assures her she is fine and refuses to visit her.  She dies.  He is griefstriken and Britt is supporting, but it is Anne he turns to.

When Britt becomes pregnant he asks her to have an abortion, when she refuses he abandons her during her pregnancy and even labor for his movies.  When she brings the child to the set of a film they are both working on, he throws her out and cuts her from the film.  He slaps her around and she finally has enough and takes off with their daughter.

His movies failing and having alienated most everyone in his life, Blake Edwards offers to do another Pink Panther film, a gesture of some charity to Sellers which he does not make easy.  When the film premieres, he publicly insults Edwards.  He withdraws into his home where he becomes obsessed with the book “Being There” and the main character, a man totally devoid of personality.  He stars in the film adaptation, resulting in an Oscar Nomination.

He dies of a heart attack at 54.  He was set to remove his 4th wife from his will, but she inherits everything – his children get only $2,000.  The only thing in his wallet is a picture of Anne.

Rori, a member of the Peter Sellers Appreciation Society adds the following…

As a huge fan of Peter Sellers and having read many books on the subject, I had to add some additional comments.

While this film hews fairly closely to the broad outlines of his life, it’s overly focused on his admittedly tragic failings. In fact some sequences are outright invention, such as his return to the “Pink Panther” franchise – Blake Edwards’ career was also in poor shape when the project was broached, and Peter’s public verbal evisceration never happened. (He also did not fake the leg injury that prevented him from playing Maj. Kong in “Dr. Strangelove”.)

You’d never know that Peter – beyond his artistic brilliance, which this film only scratches the surface of – could be a joy to be with, had several close friends/colleagues who loved him despite his flaws (and many more casual acquantances who didn’t find him a terror at all – indeed he could be wonderfully generous), and would have left far more to his children if he hadn’t died before he could change that will…among other things. 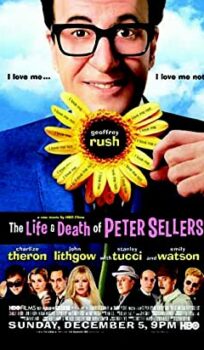