The Light Between Oceans(2016)

Little Lucy/Grace (Florence Clery) refuses to acknowledge Hannah (Rachel Weisz) as her mother and both go through an extremely painful and traumatic period, trying to adjust to be in each other’s lives, seemingly to no avail; meanwhile, Isabel (Alicia Vikander) has fallen into a deep depression, both over losing the daughter she raised and the guilt of being the one who convinced Tom (Michael Fassbender) to keep Lucy in the first place -even though he is willing to go down for the accusation of both murdering Frank Roennfeldt (Leon Ford) and kidnapping Lucy/Grace that bears against him.

As Tom is being taken away to prison in Albany, Isabel rushes to the pier -having finally read the letter he sent her while detained, which she originally refused to even acknowledge-, comes to him and tearfully confesses her participation in the whole dilemma in front of the officers. Meanwhile, Hannah, who is already bonding with Lucy-Grace -as Grandpa Septimus (Bryan Brown) agreed to call her as a compromise to the situation she came to be in-, recalls something Frank told her about “how easy it is to forgive versus the complication of hating forever” and offers to testify in favour of the couple, to spare them from a harsh sentence, most likely in appreciation of the fact that they, after all, saved her daughter from death and raised her until being found and returned.

The plot forwards to 1950; Isabel is shown to have died of cancer (never having emotionally recovered from losing Lucy) and Tom is living alone in a farm. A grownup Lucy-Grace (Caren Pistorius) shows up with her own infant son, Christopher and reacquaints with Tom. They had never seen each other since their separation, as agreed upon being acquitted. Tom gives Lucy-Grace a letter Isabel wrote, in case she ever showed up, which she reads and is visibly moved by. She embraces and thanks Tom for being the only father she ever got to know and have in her life and hopes they can still be in touch, to which he agrees. 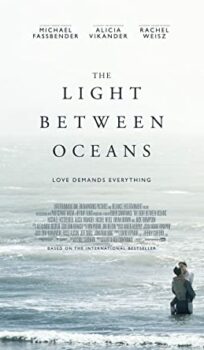