Louis Roulet (Ryan Phillipe) did beat up hooker Reggie Campo (Margarita Levieva) and did murder the other prostitute. Mick Haller (Matthew McConaughey) gets Gloria (Katherine Moennig) to convince Corliss (Shea Whigham) to lie on the witness stand in order to discredit the prosecution in Reggie’s attempted murder case. The prosecuting attorney (Josh Lucas) is forced to drop the charges against Roulet, much to the delight of his mother Mary Windsor (Frances Fisher).

During the cross-examination of Reggie, Mick gets her to admit that Roulet knew the murdered prostitute. Before being mysteriously shot to death, Haller’s friend Frank Levin (William H. Macy) discovered that Roulet had received a parking ticket outside the murdered prostitute’s apartment on the night of the murder. Mick had gotten Jesus Martinez (Michael Pena) to plead guilty to that murder to avoid the death penalty, but Mick now realizes that Jesus is innocent. Based on this evidence and testimony, Roulet is arrested for that murder.

Levin was shot with Mick’s gun, which Roulet stole from Mick’s house. After Roulet is released on bond, he confronts Mick and threatens to murder Mick and his family. However, the motorcycle gang that Jesus belongs to arrives on the scene and beats Roulet to a pulp.

Mick returns home (he is divorced from his wife and lives alone) where Mary is waiting for him. She has Mick’s gun and before shooting Mick, she admits to killing Frank. Mick draws a gun his chauffeur acquired for him and kills Mary.

Jesus is released and we see Mick recovering from his gunshot wound in the back seat of his Lincoln Continental doing business as usual with the motorcycle gang. 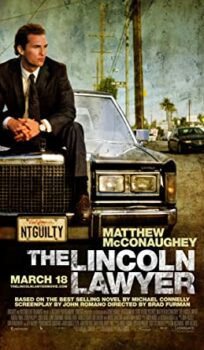