A cab driver speeds off with a suitcase before the owner can get in the cab.  In his rush to escape, the cabbie hits a policeman, and is shot dead by the police.  The police discover heroin hidden inside a small hollow statue in the suitcase.  The owner of the suitcase is a well known upstanding citizen who denies any knowledge of the heroin.  Investigation reveals that a gang of criminals is moving heroin into the country by placing it in the bags of unsuspecting travellers, and then retrieving it after they pass through customs.  Julian and Dancer (Eli Wallach) are in charge of retrieving the hidden drugs, either by cunning, deception or, if needed, brute force.  Julian is the smooth talker. Dancer enjoys the brute force.  Dancer likes killing people, and repeats their last words over and over, believing that the last words must have some significance.

Things go wrong when a bag of heroin is hidden in a little girls bag.  She finds it, and uses it to powder her dolls.  When Julian and Dancer realize the heroin is missing, they abduct the mother and daughter.  Dancer thinks they have to run for it, as “The Man” will kill them if any drugs are missing.  Julian convinces Dancer to take the mother and daughter to tell The Man what happened to the drugs.  Dancer usually leaves the drugs in a hidden drop box in the top level of an indoor mall, and must be gone when The Man arrives.  Dancer waits for The Man, and tells him the story.  The Man says Dancer will have to die.  Dancer replies that he has the mother and daughter out in the car to prove it is true.  The Man replies that no one ever sees his face, and now Dancer must die.  Dancer pushes The Man over the balcony railing, where The Man falls to his death.

The police had been tailing them, because Julian fit the description of a man at the scene of an earlier killing.  The mother and daughter in the car made the police back off.  Now, when they speed off after this murder, the police follow in hot pursuit. Dancer and Julian come to a dead end on a closed highway.  Julian starts to run back to the police to turn himself in.  Dancer shoots and kills Julian.  Dancer grabs the daughter hostage.  His plan is to get to the edge of the highway and jump down to escape.  As he releases the girl to jump, the police shoot him. 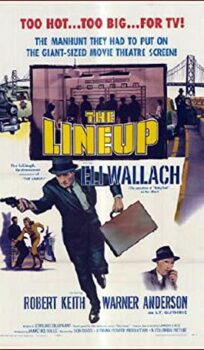