The year is 1183, and King Henry (Peter O’Toole) is getting old. He is trying to choose an heir. Prince Henry, the eldest son who was to succeed him, died unexpectedly. He has summoned his 3 remaining sons and his wife to the castle at Chinon to resolve the issue of succession. The queen, Eleanor of Aquitane, (Katharine Hepburn) and king married for strategic alliance and loath each other. Eleanor is kept a virtual prisoner in the tower.

The queen favors oldest son Richard. Richard (Anthony Hopkins) is a bold warrior. King Henry wants his youngest son John to succeed him. He favors John because John does everything the king tells him to. However, this virtue is a vice, since the simple minded John does not appear able to rule without someone telling him what to do. Middle son Geoffrey is a shrewd schemer, offended that neither parent favors him to rule. He wants the crown too. Between his brothers, he favors John, since he knows that John as king will be dependent on him for directions.

King Philip of France (Timothy Dalton) arrives as a guest for the Christmas holidays. Philip is there on a mission. His sister, Alais, was sent to England years ago to marry the heir to the throne. As her dowry, England received the province of Vexin. Philip is there to see his sister wed, or the province returned to France.

Poor Alais is an unfortunate pawn in the ruthless manipulations of the others. Sent to live in England at a young age, she was to marry the deceased Prince Henry. Instead she is now involved in a torrid and somewhat open affair with King Henry, who will become her father in law. She was raised by Queen Eleanor, who has no love for her own sons, let alone a foreign girl sent to live with her. She is now naive and without guile, and is ill prepared to deal with the treachery, deceit and back-stabbing all around her. As fortunes change, she is continually told she is to marry one or another of the sons. It is clear that King Henry, the man she thought loved her, views her as an object to be given away for his benefit. Even her brother, King Philip of France, has no real concern for her welfare. English possession of Vexin puts English soldiers only 20 miles from his capital in Paris, and all he really wants is that land back.

King Henry learns each of his sons is separately plotting with King Philip of France to overthrow him. Henry becomes so fed up with his sons, that he has all 3 throne in the dungeon. He proposes to annul his marriage to Eleanor, and marry Alais, so that he can raise a new heir. Alais points out to him that for that plan to work, he will have to kill all 3 sons. As long as they live, they are a mortal threat to any new son the king has. King Henry can not bring himself to kill his sons. He frees them from the dungeon. Queen Eleanor is sent back to imprisonment in the tower, with the implication that they will repeat this whole scenario at Easter.

Addendum:
The Lion in Winter is a fictionalized account of events in the life of King Henry II of England, but the outline of the film is based on historical fact.

Henry did have the affair with his future daughter in law, his sons did constantly plot against him and enter into open rebellion.

In real life, after Henry died, he was succeeded by Richard. Geoffrey died in a suspicious accident during Richard’s reign, but it is not known for certain if one of his brothers was involved.

Richard the Lionhearted reigned for 10 years, but died without an heir. His youngest brother John and Geoffrey’s son Arthur fought for the throne after Richard’s death. John won, and had Arthur killed.

John was a weak king, and during his reign England lost all the land it held on continental Europe. 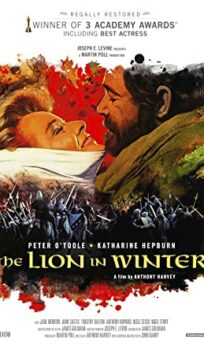