SHORT VERSION:
One day, Zira and the Outsiders ambush Simba while he is walking and conversing with Kovu a long way from Pride Rock, exposing Kovu’s allegiance to Zira in the process (although, by this point, Kovu’s views on Simba have improved largely through his new romance with Kiara, plus Simba had just fully enlightened him on what a terrible king Scar was). However, the ambush ends with Simba escaping and Nuka getting killed. Zira blames Kovu for both of these outcomes and tells him that he has betrayed Scar and the Outsiders, but Kovu retorts that Nuka’s death was not his fault and he wants nothing more to do with Scar, then runs off. Zira declares to the Outsiders that, since Simba is now weak, they are now going right into the Pride Lands and taking the kingdom by force. Kovu goes to Pride Rock to beg for Simba’s forgiveness, but Simba exiles him. Unhappy with her father’s decision, Kiara sneaks away from Pride Rock to find Kovu, and when she does, they affirm their love for each other. She soon tells him that they must return home, put an end to the fighting between their prides, and unite them.

When Kiara and Kovu reach a canyon on the edge of the Pride Lands, they find their prides doing battle on the other side of it. They cross the canyon by running along a makeshift dam holding back a river there, then get in between Simba and Zira just as they are about to have a one-on-one clash. Kiara tells her father that this fighting has to stop, plus she reminds him of how he once told her that “we are one” and correctly points out that the Outsiders are lions just like them. Simba accepts that she is right about both things, and so do the Outsiders, who switch over to Simba’s side. Zira refuses to renounce her vendetta and leaps at Simba, but Kiara tackles her, sending them both over the edge of the canyon. The dam then bursts and causes torrents of water to flow down the canyon, and though Kiara is able to save herself, Zira falls into the turbulent river and drowns. Kiara climbs back up to her family, and Simba tells Kovu that he belongs with them before they and all of the other lions head back to Pride Rock.

At a ceremony at Pride Rock that is attended by all of the herds, Simba appoints Kiara and Kovu as his successors, and he hears Mufasa’s voice say: “Well done, my son. We are one.”

LONG VERSION:
As Kovu spends time with Simba and his pride, he and Kiara fall in love with each other, and he finds himself wrestling with the decision of whether or not to tell her that Zira had sent him to kill Simba. One morning, he finally decides to tell Kiara the truth, but just as he starts to, Simba interrupts and tells Kiara that he doesn’t want her talking with him because he wants to talk with him first. He then takes Kovu away from Pride Rock and over to a section on the edge of the Pride Lands that was burned days before (due to a fire set by Nuka and Vitani to trap Kiara so Kovu could save her and therefore win Simba’s favor and get closer to him), and along the way, he tells Kovu all about Scar, and Kovu accepts the sad truth that Scar was a murderer and a terrible ruler.

Soon after, Zira and the rest of the Outsiders appear before them and surround them, and Zira praises Kovu for bringing Simba here. Simba draws the conclusion that Kovu had masterminded this ambush, but Kovu tells him that he had nothing to do with any of this. Zira orders her pride to attack Simba, and though Kovu tries to defend him, he quickly gets knocked out. The Outsiders send Simba tumbling down a nearby canyon, and he runs from them until he is faced with a slanted wall of boulders and logs functioning as a makeshift dam holding back a river on the other side. As he starts to climb up the wall, Kovu appears nearby at the top of the canyon, and Zira orders Kovu to kill him. After he takes off to find a way into the canyon, Nuka suddenly charges up after Simba intending to do away with him himself, desperate to prove to Zira that he is worthy of being the next king since he has long resented how both Zira and Scar selected Kovu to be the latter’s successor. Just as he manages to get a hold of Simba, a log underneath one of his hind paws suddenly breaks, causing him to fall, and then a bunch of other logs come crashing down on top of him and mortally injure him. Simba makes it out of the canyon and starts limping back to Pride Rock, and along the way, he is found by Kiara, Zazu, Timon, and Pumbaa. After Kiara sends Zazu off to get help, she and the others start to assist Simba the rest of the way back, but not before he tells them that Kovu had led him into an ambush by the Outsiders.

Meanwhile, Kovu shows up in the canyon and starts moving the logs off of Nuka, but Zira shoves him aside and finishes the task. Nuka apologizes to his mother for failing her and then dies, and then Zira angrily scratches the left side of Kovu’s face, giving his eye the same distinctive scar that Scar possessed. She blames him for Simba’s escape and Nuka’s death and tells him that he betrayed both Scar and the rest of the Outsiders, but Kovu retorts that Nuka’s death was not his fault and he wants nothing more to do with Scar, then runs off. Feeling that Simba has corrupted her son, the enraged Zira tells the other lionesses that Simba has hurt her for the last time, and since he is now injured and weak, they are now going to head into the Pride Lands and take the kingdom by force.

As Kiara and Nala are tending to Simba and Kiara expresses her disbelief over what her father told her about Kovu, Kovu approaches Pride Rock in order to explain himself and beg for Simba’s forgiveness. Ignoring Kiara’s pleas for him to listen, Simba yells to Kovu that he is exiling him from the Pride Lands. After he leaves, Kiara begs her father to reconsider, but he replies that Kovu used her to get to him, then tells her that she will not leave Pride Rock so, that way, he can keep an eye on her and keep her away from Kovu. She tells Simba that he does not know him, and he replies that he knows that Kovu is following in Scar’s paw prints, and he must follow in his father’s. She yells that he will never be Mufasa, then runs into the den and starts to weep. Moments later, she finds a small opening up in the roof at the back and uses it to sneak out, then goes off in search of Kovu. After nightfall, she locates him, and they affirm their love for each other. As they look at their joined reflection in a pond, he remarks that “we are one”, which stimulates Kiara’s memory because her father said that very phrase to her when she was a cub. Kovu suggests that they go somewhere else and start their own pride, but she tells him that they must return home because their place is with their pride (referring to both Simba’s pride and the Outsiders), and if they run away, they will be divided forever.

Zira and the Outsiders march into the Pride Lands just as a rainstorm starts. Back at Pride Rock, Timon and Pumbaa discover that Kiara is missing, but just as they are informing Simba about it, Zazu flies up to Simba and warns him that the Outsiders are heading this way and looking to wage war. Simba orders him to find Kiara and tells Timon and Pumbaa that they will assemble the lionesses. Not long afterward, the two prides meet up near the edge of the same canyon that Simba escaped from, and Zira soon orders the first attack. As the battle rages, Kiara and Kovu appear on the other side of the canyon and see what is unfolding, so they head down into the canyon and cross the stone and log wall to reach the other side (where we see the river growing in size and threatening to bust through the wall, thanks to the rainstorm). Zira soon confronts Simba, wanting to have the pleasure of killing him, and both prides stop fighting and encircle them. However, before either leader can make the first strike, Kiara and Kovu show up and get in between them. Both Simba and Zira order their respective offspring to stand aside, but Kiara tells her father that this fighting has to stop, and Kovu tells his mother that she will never hurt Simba or Kiara while he is here. Kiara tells her father that she now understands what he meant when he told her “we are one”, and then asks him what differences he sees in the Outsiders because they are lions like them. After thinking and accepting that his daughter is right, Simba nuzzles her. Zira orders Vitani to attack now, but Vitani refuses to, telling her mother that Kiara is right and the fight must end, after which she defects to Simba’s side. Zira responds by telling her that she will die along with Simba and the rest of his pride, but the other Outsiders defect as well, having also accepted Kiara’s words as truth and having grown tired of Zira’s vendetta.

Simba tells Zira that it is time to put the past behind them, but she steadfastly refuses to let go of her desire for vengeance. She then launches herself at Simba, but Kiara tackles her, and they tumble over the edge of the canyon and roll down it until Kiara lands on a ledge and Zira is left barely holding onto the edge of that same ledge with the bottom of the canyon lying far below her. Shortly afterward, the makeshift dam bursts, causing torrents of water to flow violently down the canyon. Kiara tries to help Zira up, but Zira refuses any help from her, and moments later, Zira loses her grip and falls into the turbulent water and drowns. Kiara climbs back up to the top of the canyon and embraces her family and Kovu, and Simba tells Kovu that he was wrong about him and he belongs here. He then tells all the lions that it is time to go home.

A day or two later, all of the herds are assembled at Pride Rock, and Simba appoints Kiara and Kovu as his successors before they (and Nala) walk up to the edge of Pride Rock and roar together as a way of announcing this to the other animals. Simba then hears Mufasa’s voice say to him from the heavens: “Well done, my son. We are one.” 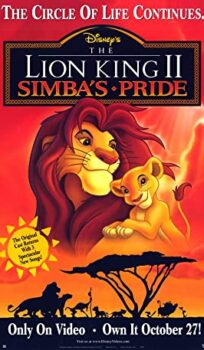