Simba, already a fully grown adult lion, meets again with his childhood friend, Nala (also an adult lioness, herself), and baboon sorcerer Rafiki.  Both of them make him realize that he must take his place as king of Pride Rock, to which he is reluctant because of the guilt Skar induced on him after the incident in which Simba’s father, King Mufasa, was killed years before.  Particularly Nala lets him know about the alliance between Skar and the hyenas that resulted in the total destruction of the Pridelands.

After having a vision of Mufasa talking to him, and finally understanding his destiny, Simba decides to return to the Pridelands, only to find ruin and devastation.  Nala, Timon and Pumbaa meet him, with the intention of helping him.

He confronts Skar about his act of betrayal, but then Skar tries to reinstate the old sense of guilt in Simba, and almost makes him fall off the top of Pride Rock (he is seen dangling, just like Mufasa was before dying).  Skar approaches to his ear and whispers: “I killed Mufasa”.  Then, Simba reacts violently and forces him to confess the truth in front of everyone.  Skar does, and a fierceful battle takes place between lions and hyenas.  Skar flees, but Simba follows him.

They both meet at the top of a cliff, in the middle of a fire caused by lightning hitting the dry bushes.  Simba spares Skar’s life, but condemning him to an exile (just like Skar did on him, as a young cub); however, when it seems Skar will comply, he instead attacks Simba cowardly, and a deadly duel starts between them.  And when it seems like Skar will jump on Simba and defeat him, Simba reacts and tosses him off the cliff.  At that moment, the hyenas, who heard Skar say they were the enemy, attack Skar and kill him.

Simba salutes his mother Sarabi, his now sweetheart Nala, and old Rafiki, climbs to the top of Pride Rock and growls, as a sign of proclaiming the beginning of his kingdom.  Time passes, the Pridelands recover their splendor, and the movie ends with Rafiki presenting Nala and Simba’s newborn cub. 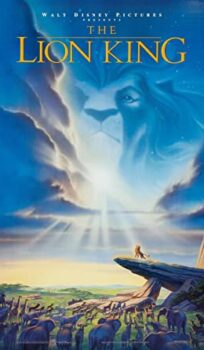