SHORT VERSION:
See The Lion King. This remake was virtually a shot-for-shot copy of the original.

LONG VERSION:
Having had enough of how Scar and the hyenas have reduced the Pride Lands to utter ruin through overhunting or driving off the herds while doing it (coupled with a severe drought that has struck the area), in addition to the other lionesses being apprehensive about taking action to stop Scar, the adult Nala sneaks out of the Pride Lands one night to find help. The following night, the adult Simba shakes a clump of dead hair out of his mane before lying down to sleep, which travels by various means all the way to Rafiki’s tree. After closely inspecting the hairs, Rafiki deduces that Simba is alive and heads out to locate him.

Nala makes her way to the jungle that Simba, Timon and Pumbaa reside in, and she encounters the latter two first and chases after Pumbaa to make a meal out of him. Just as she has him cornered, Simba leaps in and fights her, not knowing who she is. However, he recognizes her after she pins him like how she did when they were cubs, and after he tells her who he is, they have a happy reunion. Believing she has come here to live, Simba tells her that she is going to love it here, but Nala tells him that they need to go back to the Pride Lands so he can take his rightful place as king, saying that Scar has taken over with the hyenas. Simba tells her that this jungle is his home and asks her to stay, and though she replies that she can’t, he shows her around anyway. While doing so, they discover that they have romantic feelings for one another. Later, she asks him why he has never come home, and adds that the pride really needed him. Simba replies that they’re fine and nobody needs him, and that Scar is the king. She tells him that Scar has decimated the Pride Lands, and though she again stresses that he needs to return and challenge Scar for the kingship, he adamantly refuses to do so, never once telling her that he is in exile due to his (unfounded) belief that he accidentally killed Mufasa and feels too guilty about it to go back and face everyone. Disappointed, Nala gives up on Simba and leaves to return to the Pride Lands.

That night, Simba walks through the jungle mumbling to himself over what he and Nala talked about until he crosses paths with Rafiki. Rafiki questions him about who he is, and when Simba replies that he is nobody, Rafiki tells him that he knows he is Mufasa’s son. He then tells the curious Simba that his father is alive, and he can take him to him, then leads him on a chase through the jungle. Rafiki brings him to a stop once they reach the edge of a small lake, then has him look down on the water’s surface to show him his own reflection. Simba says that he doesn’t see his father, but Rafiki tells him to look closer before disturbing the water with his hand. This causes Simba’s reflection to transform into Mufasa, and Rafiki explains that Mufasa is alive – in him. Simba then hears his father’s voice calling out his name from a storm cloud overhead. Mufasa tells him that he must take his place in the circle of life, and he must remember that he is the one true king, but Simba replies that he can’t do it because he doesn’t know how to be like him. Mufasa tells him that, as king, there was one thing he was most proud of: Having Simba as his son. As the storm cloud fades and the sun begins to rise, Simba pleads with his father to not leave him again, but Mufasa says that he has never left him, and he never will, and once again implores him to remember who he is. Afterward, Rafiki again asks Simba who he is, and this time, he replies that he is Simba, son of Mufasa. He then runs back to the Pride Lands, and he meets up with Nala along the way and tells her that they must get home.

After the two lions reach the edge of the Pride Lands and Simba sees how much of a wasteland it has become, he tells Nala that he fully intends to fight for it, and Nala affirms that she will stand with him. Zazu then appears and welcomes Simba back home, then Timon and Pumbaa show up, having been following Simba ever since he departed, and they offer their services. After seeing Simba, Nala, and Zazu use Timon and Pumbaa to distract several hyena guards so they can reach Pride Rock, Rafiki takes up his signature walking stick and heads out to assist them in the inevitable conflict.

Meanwhile, Scar is again offering Sarabi a place by his side as queen (in this remake, he apparently lusted for Sarabi years ago, but lost a fight with Mufasa for the right to be her mate), but she refuses once more, then tells him that he is nothing compared to the kind of king Mufasa was. Scar attacks her, but then Simba shows up and roars before ordering Scar to get away from his mother. Scar soon stands with the hyenas while Nala and the other lionesses back up Simba, and Simba tells Scar that he only has two choices: Step down, or fight. Scar instead brings up Mufasa’s death and gets Simba to confess to the other lions that he was the one who killed him, then taunts him with that and with running away from the Pride Lands in order to bring his long-harbored guilt to the surface and leave him addled, all the while making him back up to the edge of Pride Rock’s peak. He then makes Simba lose his footing and hang off the edge by his front paws when he orders him to bow to him, after which lightning strikes some dry trees and brush directly below Simba, starting a fire that quickly spreads. Scar tells Simba that this is the way Mufasa looked before he died and he saw the fear in his eyes, then steps on Simba’s paws before whispering in his ear that he was Mufasa’s murderer. Simba’s mind then flashes back to his father’s demise and he becomes enraged, clamping his jaws on Scar’s mane and pulling himself back up. He orders Scar to tell the truth, but when Scar denies any wrongdoing, Sarabi brings up how he said back then that he didn’t get to the gorge in time. When Scar replies that that is true, she asks how he was able to see the fear in Mufasa’s eyes. Accepting that he has been caught, Scar orders the hyenas to kill them all.

Simba, Nala, their fellow lions, and Timon, Pumbaa, and Rafiki wage a fierce battle with the hyenas (with Nala defeating the hyenas’ leader Shenzi) until they manage to overwhelm them and send them running, but Simba notices Scar retreating up Pride Rock and chases after him until he traps him at the summit. Scar begs for mercy, then tries to pin blame on the hyenas by saying that those “revolting scavengers” made him kill Mufasa and he was planning on killing them all. However, he is unaware that Shenzi and her top henchmen Azizi and Kamari have witnessed this. Simba soon decides to exile Scar rather than kill him, and though it seems like Scar may obey him, he suddenly swats up some embers into Simba’s face to disorient him before attacking him. They have a brief fight that ends with Simba sending Scar falling down the cliffside and tumbling all the way to the bottom. When Scar regains his footing, he finds himself surrounded by Shenzi and the other hyenas, and he tells them that, in time, they will rebuild their army and retake the Pride Lands. However, Kamari and Azizi bring up what he just told Simba, and Scar replies that he was only trying to fool Simba and tries to assure them that they will rule together. Unfortunately for him, the hyenas don’t believe him, and they maul him to death. Rain then falls and extinguishes the flames, and the hyenas disappear soon after.

Simba rejoins his family and allies below, and Rafiki soon gets his attention from the peak to let him know that now is the time to assume the throne. After walking up to the edge of the peak and hearing his father’s voice from the heavens say “remember”, Simba lets out a loud roar to announce the beginning of his reign. Sometime later, the Pride Lands have been restored to their former beauty, and with Simba, Nala, and their family and companions looking on, Rafiki presents Simba’s daughter at Pride Rock to the many herds below, continuing the circle of life. 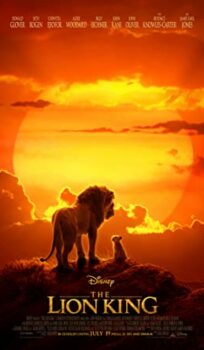