Ariel is horrified to find that Eric has suddenly fallen for, and intends to immediately marry, another woman on the day the spell that made her temporarily human is to break unless he kisses her by sunset.

As the wedding barge sets sail, her seagull friend Scuttle discovers that the other woman is a disguised Ursula, who used Ariel’s bartered voice to hypnotize Eric. She and her other animal friends crash the wedding and she gets her voice back, but just as she and Eric are about to kiss, the sun sets. She becomes a mermaid again, and Ursula prepares to turn her into a polyp – until Ariel’s father King Triton arrives and agrees to take her place. Thus rendering Ursula ruler of the sea, she tries to kill both Ariel and Eric, expanding to monstrous size; Eric kills Ursula instead by stabbing her with the prow of a dislodged shipwreck he commandeers. This frees all her prisoners, including Triton.

Triton, finally understanding of Ariel’s love for Eric, turns her into a human permanently, and the lovers wed. 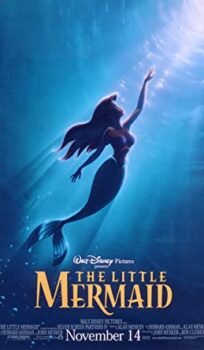