The viewer is left to determine whether Sparma killed anyone at all.

Deacon and Det. Baxter have been watching Sparma. Deacon goes to get something and Sparma approaches Det. Baxter asking him to get into his car so they can drive out to where he buried one of the victims. Det. Baxter goes, leaving Deacon behind as Sparma requested, and Sparma has him dig holes, toying with him and saying he can’t recall exactly where the girl is buried. Det. Baxter is extremely frustrated with this – and we see in a wide shot that he’s dug 10+ holes – wacks Sparma with the shovel. Sparma collapses, dead, and Det. Baxter doesn’t know what to do.

Joe comes and tells Det. Baxter what to do to cover up Sparma’s death. It is revealed here that the case that drove Deacon from the LA County Sherriff’s office — he had a heart attack, got a divorce, and moved/took a lower-level position — one of the three victims was found alive and Deacon accidentally shot and killed her; his team and the coroner help cover this up and it was never revealed.

Joe Deacon, while Det. Baxter is burying Sparma, collects Sparma’s things from his apartment in black plastic bags & drives to a neighborhood where some guys are hanging around a car. He tosses one of the keys and keeps walking. He returns to Det. Baxter and tells him to take some time off.

We then see that the case is taken over by the FBI while Det. Baxter is on leave. The new FBI agent is seen giving a talk to the police officers and says the same things that Deacon did about the suspect – high mileage car, changes jobs, etc. – and then we see Det. Baxter sitting next to the pool, traumatized by what happened, as his daughters play.

Intercut with Det. Baxter, we see Deacon burning the bags in a barrel. Det. Baxter’s wife brings him an envelope from Deacon that contains a red barrette (which was an item that was taken from one of the victims) and we can see him relax a little. But next, we see Deacon take a new packet of barrettes out of his car, one missing, implying that Deacon sent him the barrette only to assuage Det. Baxter’s guilt and Joe tosses it into the fire with everything else and then goes into his house with his dog. 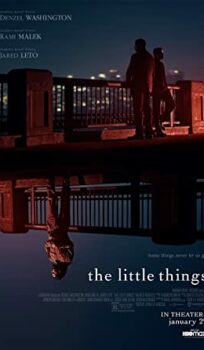