Jody Varner (Anthony Franciosa), furious at his father Will (Orson Welles) for consistently preferring (and promoting) drifter Ben Quick (Paul Newman) over him, locks his father in the family barn and sets it on fire, hoping that the crime will be blamed on Quick, as Quick has a reputation for being a barn-burnerer. At the last moment, Jody breaks down and rushes into the barn, saving Will.

Will has a new found respect for his son Jody, and assures the townspeople (who were getting ready to capture and hang Quick) that he started the fire by dropping his cigar by accident.

Meanwhile, Quick is going to ditch town, but is stopped by Will’s daughter, Clara (Joanne Woodward), who finally realizes she loves Quick and isn’t prepared to give him up. The movie ends with the two of them together. 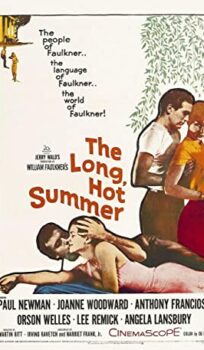