Jesse and Frank James (James and Stacy Keach), along with the Younger brothers (David, Keith, and Robert Carradine) and Miller brothers (Dennis and Randy Quaid) are robbing banks throughout the Midwest and avoiding Pinkerton agents.  After Ed Miller needlessly kills a bank teller, he gets kicked out of the gang, and they decide to take a break.  The James, two of the Youngers, and Clell Miller return to Missouri, where Jesse marries his longtime girlfriend, and Cole Younger goes to Texas to be with his prostitute girlfriend Belle (Pamela Reed).

The Pinkertons go to Missouri in order to capture the gang, but all they do is kill innocent people, including the James’ 15 year old brother and the Younger’s cousin.  The gang briefly reunites to kill the Pinkertons responsible for the deaths.  The head Pinkerton agent Rixley (James Whitmore Jr.) goes to Ed Miller, currently in jail for starting a fight while drunk, and tries to get him to turn on his brother and the rest of the gang.  Ed refuses, claiming he would be killed by the family of the James and Youngers once he got out of jail if he turned on them.

After nearly a year off, the gang reunites and their first target will be a bank in Northfield, Minnesota that Clell had previously scouted.  The gang travels to Minnesota and prepares to rob the bank, unaware that the Pinkertons had already figured out that would be their next target and are ready to ambush them.  The robbery goes badly and, in the resulting shootout in the streets of Northfield, several Pinkerton agents are killed, but so is Clell.  All three Youngers are badly wounded, and Jesse makes the difficult decision to leave them behind while he and Frank, who was also wounded in the shootout, return to Missouri.  The Youngers are captured and sent to prison, where they are recovering from their wounds and are refusing to help the Pinkertons capture the James.

Back in Missouri, Frank is recovering from his wounds and ready to quit, while Jesse wants to start a new gang.  He recruits the Ford brothers (Christopher and Nicholas Guest) to join the gang, but they had already made a deal with Agent Rixley to get Jesse.  While planning the next robbery, the Fords kill Jesse by shooting him in the back.  The movie ends with Frank surrendering to Agent Rixley on the condition that he can bury his brother first. 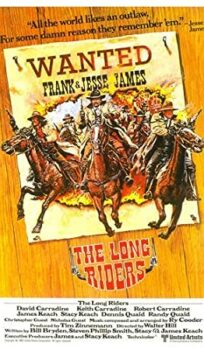